The Puma v1.10SL has really gone through the colourways since it’s launch back in July! White/Blue, Yellow/Green, Purple/Tender Shoots (whatever that is…) It’s good to see the second-lightest football boots in the world come full circle to something a little more traditional! 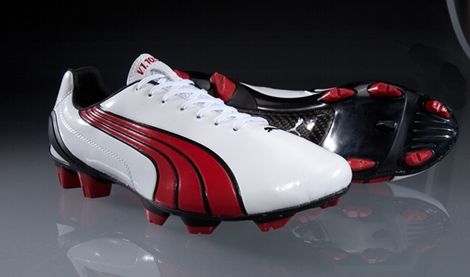 Launching at the same time as the White/Black/Gold Puma King Finale and the Black/Aged Silver PowerCat, it’s safe to assume that Puma are going for a back-to-basics approach for this seasons colourways, with a more classic feel to all their top-level ‘statement’ football boots.

We’re a little surprised that we don’t see White/Red/Black used on more football boots as these v1.10SL‘s are really smart looking, the black outline running around the Big Cat, toe and Form Stripe really making the Pompeian Red pop off the rest of the white boot. 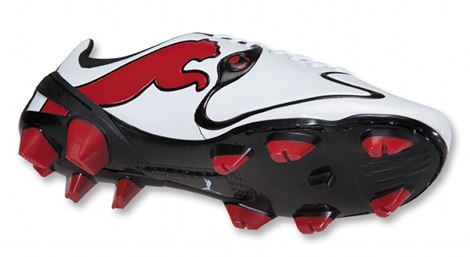 The only criticism we;d have of the design is the whole boot does get a little ‘busy’ at the inside heel where the heel counter meets the black outline and red cat – but overall a very well designed colourway!

We’re genuinely surprised that more players haven’t plumped for the v1.10SL since their release 6 months ago, with the likes of Samuel Eto’o and Alexander Hleb having been spotted in them inconsistently. We’re hoping that this new colourway gets a few more famous faces (and feet!) into these under-rated football boots. 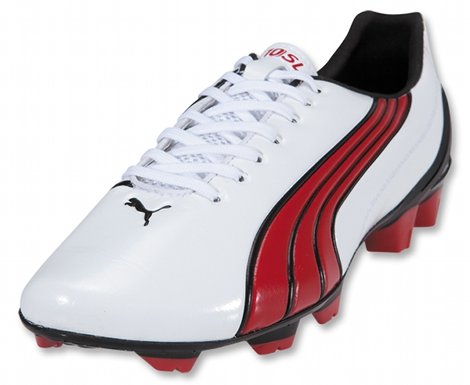 At 150g (a mere 5g heavier than the new adiZero Prime) Puma find themselves in an unusual position – on one hand their boots are now not as light as the adiZero, but thanks to the Prime’s new £200+ price tag, the v1.10SL all of a sudden look great value for money (and believe us, at £185 we say that through gritted teeth..!).

We want to know; What do you think of the new colourway – but there’s several other key questions we want you to answer!

What could Puma do to shave 5g off to match the new Primes? Something gimmicky like kevlar laces? Or overhaul the soleplate and replace the carbon fibre with a lighter plastic?

Also, if you were Puma – how would you market the v1.10SL now that they’re no longer the lightest football boots on the market?

Sound off in the Comments!

Written By
Kyle Elliot
More from Kyle Elliot
We put our reviewing (and passing) skills to the test with the...
Read More