Puma have gone all out with the their World Cup colourways this year! 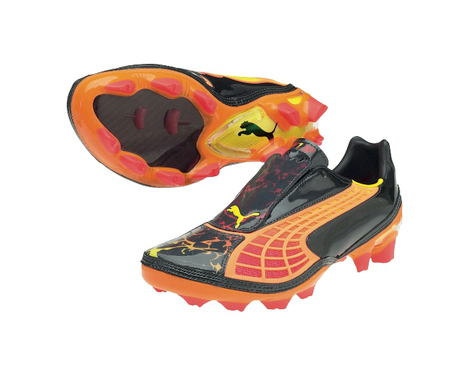 After witnessing the subtle colouring of the PST and sole of the Puma PowerCat 1.10 Tricks, we certainly weren’t expecting this blaze of colour in the Puma v1.10 Tricks!

The Puma v1.10 Tricks are described as Navy/Fluro Peach/Red – but let’s be honest; that doesn’t really do them justice!

The Lava effect is not only one of the most striking we’ve seen on a boot all year -'  but it actually serves a purpose. 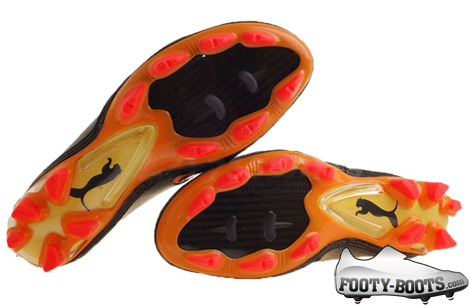 The Puma v1.10 Tricks are designed to complement the special Africa Unity Kit.

As you’ll remember – Puma’s Africa Unity Kit starts as a Sky-Blue shirt, before fading into Earth-Brown Shorts and Socks. These football boots are coloured to represent the raw volcanic power of the lava underneath the ground.

Pretty smart, right? We’re also fans of the signature Puma stripe up the side that fades up the boot, which makes the whole boot look like it’d be hot to the touch! 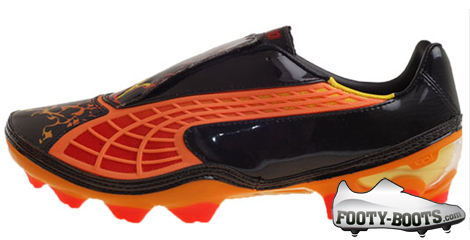 An interesting move by Puma is the choice to replace all of their signature MicroFibre canvas on the upper, with a more frictionless, waterproof Synthetic leather. We reckon this might be to keep players feet warm and dry in the South African winter during the Wold Cup.

If there’s one thing we’d have changed – we’d have loved to have seen the Yellow insole (that you can see through the clear UNiX heel counter) coloured black instead to give the boot a really lethal look!

Here’s a quick look at the v1.10 Tricks in action with the new Africa Unity kit – with a great close up of the boot at the end.

But that’s just our take – what do you think?

Let us know with the boot-0-meter and a comment!

Written By
Kyle Elliot
More from Kyle Elliot
The FA will be giving 3 lucky fans the chance to score...
Read More