To see their best players through to the Knock-Out stages of the 2010 FIFA World Cup, Puma have launched these new JB Final v1.10’s!

Inspired by Johannesburg – The City of Gold – these boots are certainly the most bling (is it still cool to say ‘bling’!?) football boots that you’ll see on the pitches of South Africa this summer.

Keen football fans will also notice the textured lace cover of the Puma v1.10 has been designed to reflect the distinctive panels of the Soccer City stadium, where the World Cup Final will take place in July. 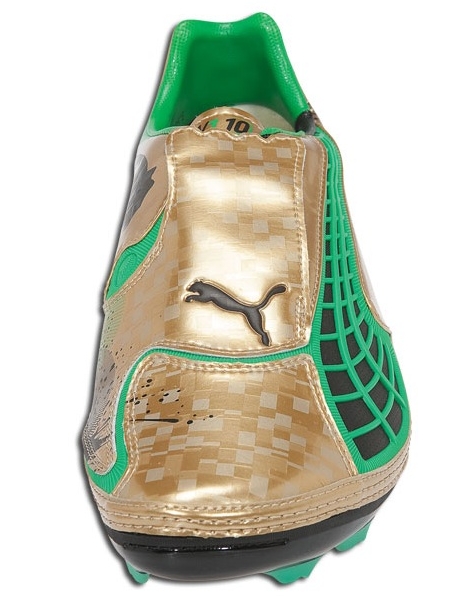 The Gold/Black/Fern Green Puma v1.10 colourway really shouldn’t work as well as it does – so hats off to Puma for clearly putting a lot of effort into the colour choice!

Puma have a surprisingly good selection of players in their flagship boots for the Knockout stages, so you won’t have to look too far to see some players in these distinctive boots!

What do you think is this gorgeous gold or gaudy gold?