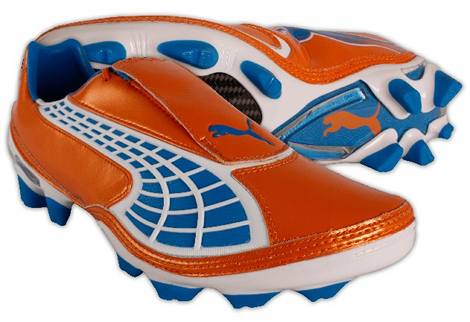 Well, is seems Puma are going the opposite to understated and classy and going for bold and bright with their latest release!

This is the Puma v1.10 in Florescent Orange/ Blue Aster/White and shows off Puma’s speed football boots in a way we’ve never seen them before!

The majority of the upper is Fluro Orange, making sure these cleats are going to be seen from everywhere on the pitch (and we hasten to suggest such a thing, but maybe take some of the attention off the hi-viz adiZero Prime?) and would look great with a number of top football kits.

The Blue Aster is used to great effect on the Puma branding, including the formstripe on the outstep and the ‘big cat’ on the instep, offering an eye-pleasing contrast to the bold orange.

We don’t often see White used in the detailing of such brightly coloured football boots, but it just (and we mean just!) about works here on v1.10 – especially on the sole.

Whatever you think of the Orange upper, we think that one of the highlights of these cleats is the White and Blue working with the hefty transparent Unix heel counter to great effect – probably the best looking part of these football boots. 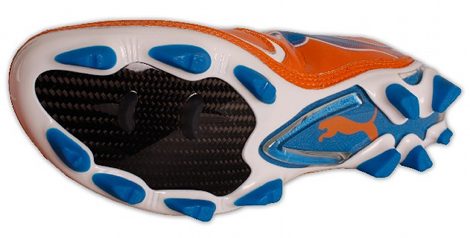 We think it’s a good effort again from Puma as they continue their run of great colourways, though this doesn’t quite reach the levels that the previous White/Black/Red v1.10 did, in terms of ease on the eyes.

We’d like to see another Fluro orange v1.10, but perhaps with black detailing to make the cleat look something like a football boots version of the famous Dutch football shirt! 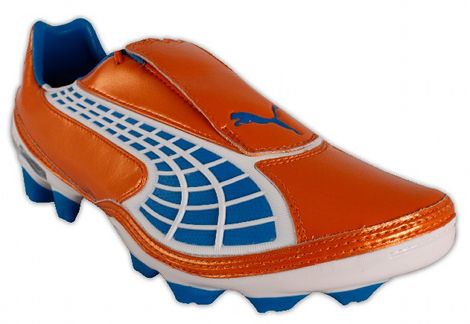 Part of Puma’s Speed range – the v1.10 is Puma’s flagship in the Velocity range; and you’ll be able to start ordering it in this bold colourway from today with an RRP of £120.

As always, it’s what you think that matters the most – so shoot us a comment and let us know what you reckon to these latest Puma cleats!