Following up from their ground breaking Africa Unity Shirt, Puma have released a striking pair of football boots on the same initiative! 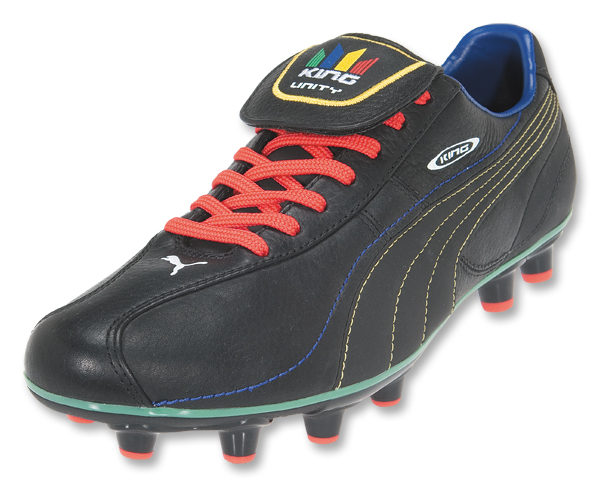 The Puma Unity King XL is the pinnacle of Puma’s Unity initiative. Striving for a continent-wide feeling of harmony across Africa through love of football, Puma are doing their bit to show that Africa is ready to host the World Cup with open arms, as well as supporting the Play for Life campaign and the UN’s Year of Biodiversity. 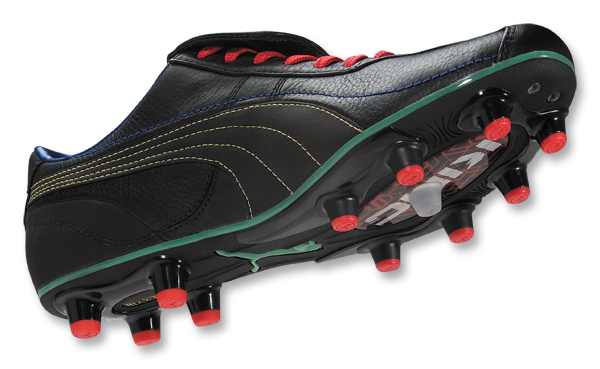 Puma will use a percentage of the proceeds from the Puma Unity King XL'  to fund its Soul of Africa program. In this program, PUMA will buy African-made soccer balls to create local jobs, then will distribute these balls to schools in Nigeria, Ghana, Cameroon and South Africa.

Onto the boots themselves – Puma describe them as Black/Black/Puma Red – but as you can see there’s more than just black and red going on, on this pair of football boots!

The contrasting detail stitching, coloured studs and soleplate give the whole boot a sort of understated fun feel, and represent the unity of these bold colours working in harmony.

Another great touch by Puma is to include several different textures of leather across the football boot – with smoother, firmer leather on the heel counter and Puma stripe, and softer, more flexible leather across the toe and forefoot!

In addition to getting a strictly limited edition pair of Puma King XL‘s – Puma also include a complete care kit, with a branded and embroidered boot bag, leather food, brushes and cleaning cloth.

These football boots will retail at £130 in the UK and $149.99 in the US, and are sure to become something of a collectors item – so if you fancy them, make sure you order quick!