At the launch of the new Puma ‘Tricks’ football boots, Olivier Giroud was quizzed about the Tricks boots and the forthcoming European Championships. 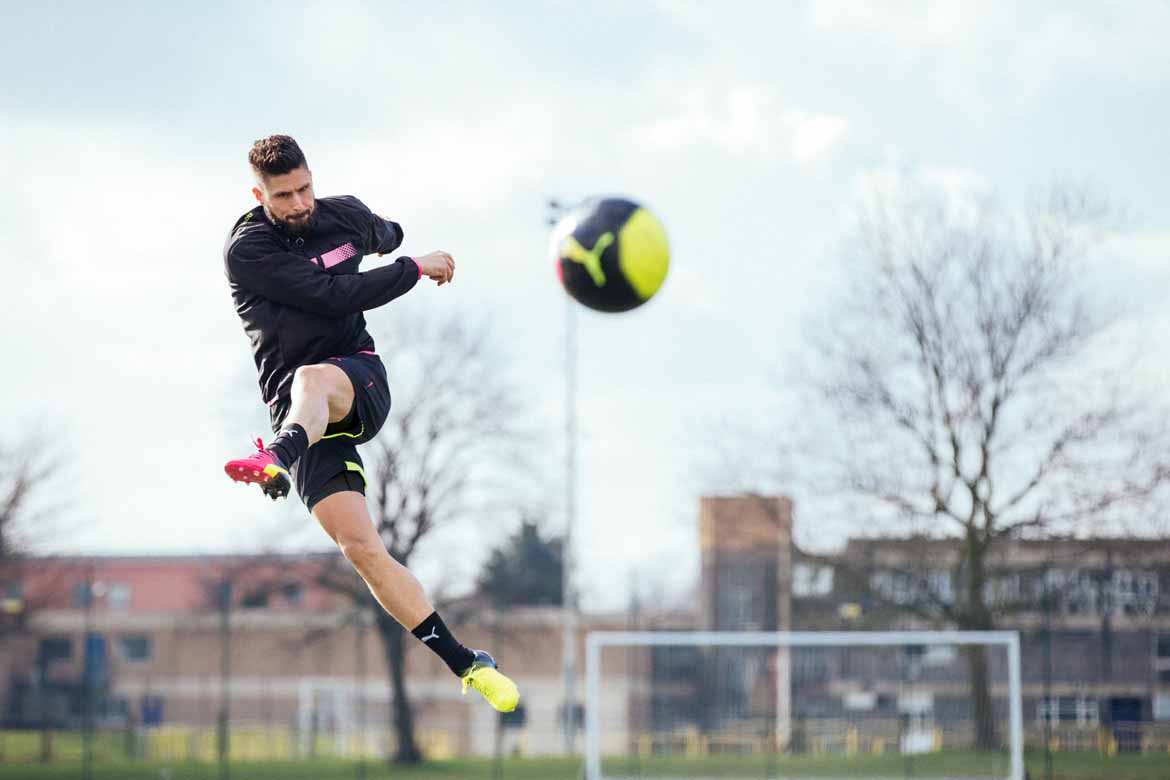 We know you’re a man with style, what do you make of the Tricks duality boot concept

Well you know an exciting summer is ahead when Tricks boots are launched! I think the Tricks boots are totally different to anything else out there, and the design is great, so yeah they’re cool! I also love the history behind the collection – the boots being inspired by Rigobert Song who decided to wear one yellow and one red boot in the 1998 World Cup – hosted by France. Now that we are back in France for another tournament, it only seems right to have Tricks boots!

How do the latest Tricks boot colours look and feel on pitch?

I think the pink and yellow combination is very striking – the colours are so bright they are bound to catch a lot of attention on pitch. The design features have really developed for this year’s Tricks boots, PUMA have hands down outdone themselves this year with such a beautiful model and colourway.

You are an evoPOWER player and currently wear the evoPOWER 1.3 on pitch, how does this boot support your style of play?

When I became an evoPOWER player, I knew instantly this was the right kind of football boot for me. The most recent boot, the evoPOWER 1.3 is the ideal balance of power, balance and agility, all of which I need to play at my best. I am a strong and physical striker compared to many others in my position, so a flexible boot provides me more kicking power, whilst the gradual stability frame in the outsole keeps me balanced on my stance leg. The perfect combination to hit the ball hard and with accuracy…

In the Tricks film that was just released, you are in a hotel scene with Antoine Griezmann having a kickabout, should we look forward to seeing more from the two of you this summer?

Yes, definitely.  I hope that you will see a lot from us this summer. Griezmann is an amazing player as he has shown so many times this season for both Atletico and France? Antoine has so much to bring to the team, and I’m looking forward to playing alongside him.

As the host nation of the Euros this summer, are Les Bleus feeling the pressure to perform on their home turf this summer?

Of course there is added pressure, but it is also really exciting. Having the whole nation behind you is very motivating.

So the Euros have a new format this year with 24 teams reaching the group stages versus the 16 team format of the last two decades. What do you make of the new set up?

At first I have to admit I was a little confused by the new format, but actually I think it’s pretty cool that more teams can qualify to take part in the tournament. After all, we are all there for the same reason, our nation’s love of football – so why shouldn’t more teams get to represent their nation at the Euros?

Now that there are more groups, the tougher teams are more spread out, does this help your chances of progressing through the earlier stages more easily?

I don’t think so, I think you have to take every game as it comes and not make any assumptions as anything can happen on pitch. The groups are still competitive, and I believe that this is down to the quality of European football is always developing.

The final will be held at the Stade de France, which held the 1998 World Cup final in which France defeated beat defending champions Brazil 3-0. Do you remember this moment? How do you think France will react if the team make it the final?

Oh wow yes, who doesn’t remember that day? I was pretty young, but I remember the excitement and emotion everyone felt when we won, it was an amazing feeling! I think the reaction will be very similar across the whole of France if we were to reach the final – we are football loving nation so to win the title as hosts would be incredible.

I’m not saying I want to face the defending champions early on, but I look forward to seeing my good friend Santi (Cazorla) maybe in the knockout stages or further on… (laughs).

And of course… Prediction for Euros title?

Written By
Scott
More from Scott
The France and Arsenal hitman talks Euro's and Tricks at the Puma...
Read More