Puma have confirmed that the new Puma South Africa home shirt is strictly a limited edition, and only strict quantities will be produced to celebrate the new kit deal. 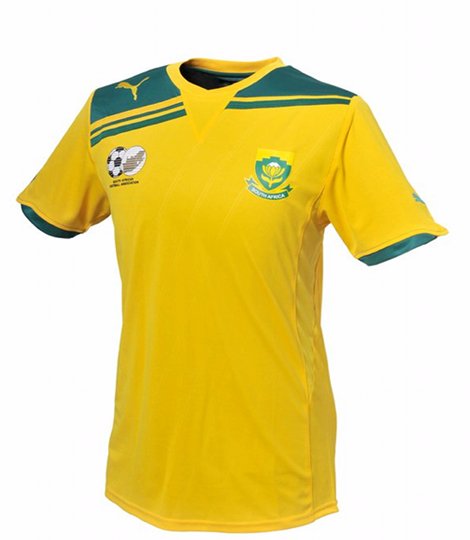 After turbulent 6 months without a kit supplier, it seemed that the saga of Puma/adidas/SAFA had finally culminated in a new home kit for Bafana Bafana.

However, many were left a little underwhelmed by the German brand’s design, given it’s ‘template’ styling from last season’s Tottenham Hotspur kit.

And the SAFA sprung another surprise on their new technical supplier by announcing at the launch that they would be challenging Puma to create a lower price point than adidas’ R599 to allow more South Africans to get behind their national team.

Puma then confirmed in the days after the kit launch that the new Puma South Africa home shirt was limited to only 2000 units, intended as a collector™s item in celebration of the new partnership, rather than for the mass market. Perhaps most interestingly, Puma also said they have been priced accordingly at R899

The national team will wear what is being described as the ‘interim’ kit as Puma confirmed it has included South Africa in an exciting African-wide kit concept the brand has developed for the 2012 African Cup of Nations.

So, perhaps as well as a more individual Puma South Africa home shirt this could be our first hint towards a second ‘Africa Unity Kit’ from Puma?

Most interestingly, it shows how keen the SAFA were to get Bafana Bafana out of their old adidas kits.

Whilst there’s no doubt it was embarrassing for the biggest power in African football to be playing in a ‘handout’ kit from the Three Stripes, we don’t envy Puma having to come up with and produce a whole new football kit mere weeks after signing the deal.

Written By
Kyle Elliot
More from Kyle Elliot
We pit the fearsome Nike Bomba Finale II against it's predecessor in...
Read More