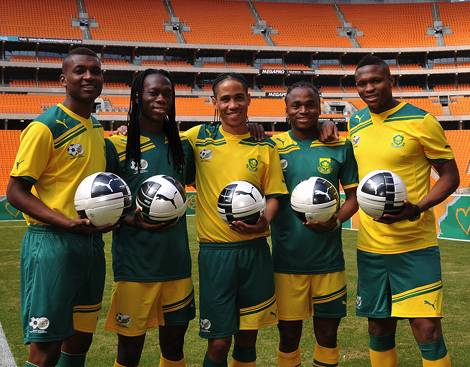 Yes, after 7 months of not having a technical supplier, failed deadlines, emergency kits and supposedly ‘done deals’ the SAFA and Puma now have an actual, physical football kit – Puma South Africa Home Shirt 2011/12.

We’ve taken a special interest in the protracted negotiations that surrounded Bafana Bafana’s new football kit, so if you’re not sure about the in’s and out’s of this saga, be sure to read some of the related articles at the bottom of the post.

For the rest of us – especially our South African contingent – we can all breathe a sigh of relief that Puma South Africa Home Shirt 2011/12 now actually exists.

Even if it’s just a palette-swapped Spurs kit.

Maintaining the Yellow/Green Trim combo that South Africa wore when they captured the hearts of the world at their own World Cup last year, the Puma South Africa Home Shirt 2011/12 definitely has an air of ‘If it ain’t broke, don’t fix it’ about it.

But SA fans will be thrilled to see that the Protea and SAFA badges have made it on to the Puma South Africa Home Shirt 2011/12, given that it was allegedly this badge that caused the rift between adidas and the SAFA last summer.

In line with PUMA™s commitment to Africa, all proceeds from Puma South Africa Home Shirt 2011/12 sales will be donated to the SOS Children Villages in South Africa, a cause designated by the South African Football Association.

The SAFA has also requested that Puma lower the RRP of their shirts from 599r (approximately £55) to give more South Africans the chance to own one; Kirsten Nematandani, president of the SA Football Association, said, “We won’t accept the R599 as the required amount to own a national team jersey; it has to be a bit less than that. We know some of our fans cannot afford that price.”

It will be interesting to see how Puma handle the pricing of this shirt, given the SAFA’s seeming insistence, and Puma’s dedication to providing kits for developing African countries despite a treacherous market.