So, the new Puma PowerCat 1.12 SL has been revealed, and the general consensus amongst even our boot-savvy readership is ‘What’s the Difference?’

Well, we’ve shunned the sunshine this weekend, and have spent the last couple of days studying the key differences between Puma’s upgrade to the PWR-C line. 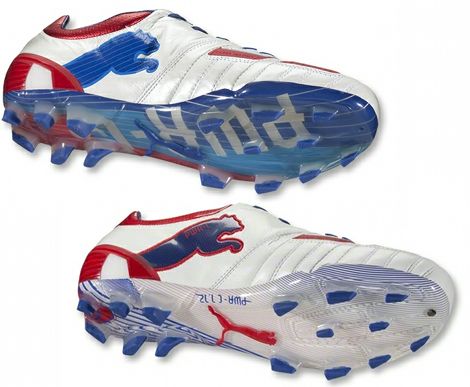 As an ‘SL’ release, we thought we’d start with the obvious.

Whilst both of these football boots look stunning in Puma’s White / Ribbon Red / Limoges Euro 2012 livery, there is a slight difference in the colours used on each cleat.

The Puma PowerCat 1.12 follows on from the other PowerCat colourways, by having a holographic sheen to the Ribbon Red, giving a brighter, ‘candy’  red appearence.

The PowerCat SL, however, has a more matte metallic finish, that we think makes the Limoges blue pop exceptionally. 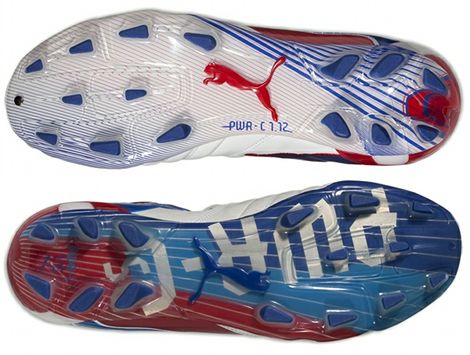 It’s probably fair to say that the SL’s are probably going to be viewed as the overall ‘better boot’, but we reckon the PowerCat 1.12 has the better soleplate – the White-with-a-hint-of-Blue look is super-clean and screams lightweight speed, whereas the SL is just kind of overly-busy.

Boot-spotters take note, this is likely going to be the easiest way to tell which version of the boot Fabregas, De Jong, Reus & Phil Jones are wearing on the pitches of Poland & Ukraine.

In the name of weight reduction, the PowerCat SL swaps out the standard TPU soleplate for a new Pebax version, with injected studs. The layout of the bladed studs stays the same, but you’ll notice the ‘clouded’ look of plastic at the bottom of the studs on the SL. 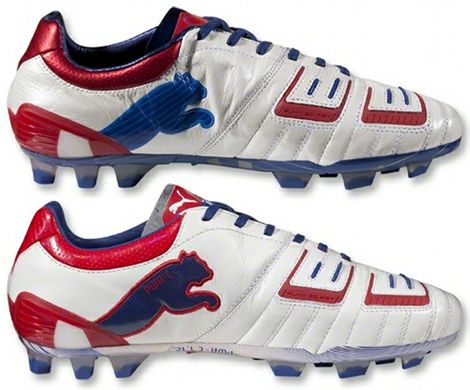 One of the few complaints we heard on the PowerCat 1.12 was their break-in period was pretty rough going for a K-Leather boot. So, on the SL, Puma have switched out the leather for a new lighter grain which – as you can tell from the pictures – looks super-soft.

You’ll also notice that the ‘Big Cat’ Graphics are printed onto the instep of the SL, rather than stitched, and the tongue has dozens of holes punched in it to help drop that all-important weight.

What do you think of the new PowerCat 1.12 in White / Red / Limoges in comparison to the PowerCat SL?

Which one would you buy?