Aside from the limited edition v1.10SL Lightning, Puma have been a little bit quiet on the colourway front since the World Cup, when they had both the excellent Tricks range and the JB Final series on display. 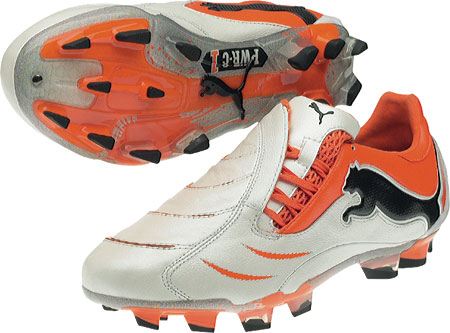 Well, that drought has come to an end with the new Puma PowerCat 1.10 in White/Black/Team Orange!

Less a PowerCat, more a PowerTiger in this bold colourway (see what we did there?) Puma are another brand who has decided to bring a splash of Orange to their football boots, much like the Nike Elite Series, adidas’ ‘Warning’ adiPure‘s and Under Armour’s Blaze Orange Dominate Pro; Orange truly is the colour du jour!

All the digital football boots-spotters out there will already have had a sneak-peek at these football boots, as they’ve been in FIFA 11 since it’s release, though admittedly they do look a bit more ‘amber’ on screen than orange. 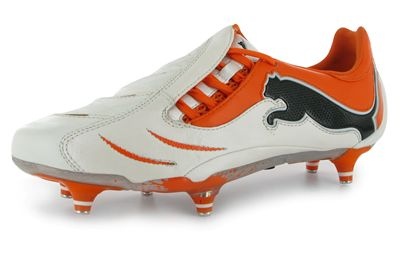 The new White/Black/Team Orange colourway is set out pretty nicely across the boot, with the Team Orange being used mostly in the heel section and in the PowerCat’s ‘Gills’ to highlight the 3-D Power Shooting Technology.

Aside from the Dutch national team, we’re struggling to think which Puma PowerCat wearers would really match this new colourway! But we definitely expect players like Vedran Corluka, Tomas Rosicky and Shay Given to give them a try (though we’re not sure that Carrick & Vidic will be willing to part with their Red/Black/Silver PowerCats that match their Manchester United Home kit so well!).

The Puma PowerCat 1.10 in White/Black/Team Orange is available to pre-order from October 30th and will retail for £119.99.