To see their best players through to the Knock-Out stages of the 2010 FIFA World Cup, Puma have launched these new JB Final PowerCat 1.10 football boots!

Inspired by Johannesburg – The City of Gold – these boots are certainly the most glamorous'  football boots that you’ll see on the pitches of South Africa this summer (unless adidas do their usual trick of having a pair of gold Predator’s in the final!).

Many will notice the ‘splatter’ patterns across the upper of the PowerCat 1.10 JB Final – a motif that Puma have been using in a lot of their Love = Football advertising, so the boot really captures what Puma have been about these past 6 months! 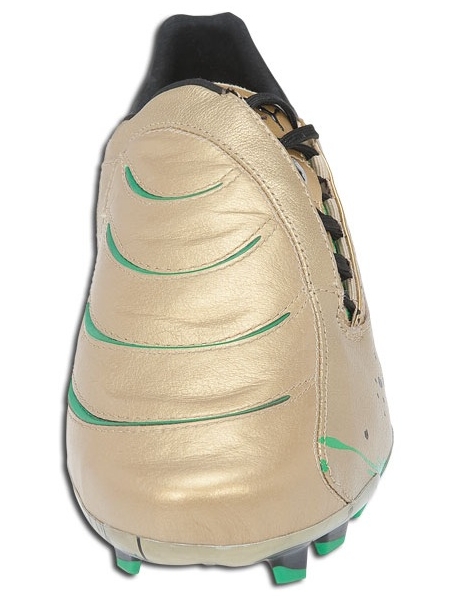 The Puma PowerCat line has been a surprising success in the football boots marketplace since their launch, this World Cup has seen many goalkeepers adopt the boot as their weapon of choice – surprising when you consider that Puma had every intention of marketing it as a striker’s boot!

Puma have a surprisingly good selection of players in their flagship boots for the Knockout stages, so you won’t have to look too far to see some players in these distinctive boots!

What do you think is this gorgeous gold or gaudy gold?