PUMA has extended its partnership with French international footballer Olivier Giroud through a new long-term contract. 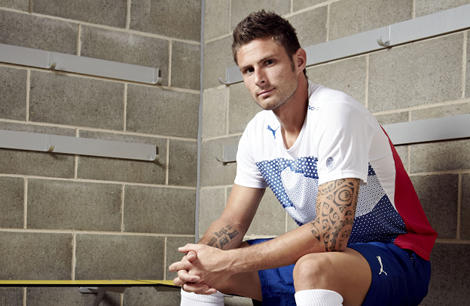 Giroud, who recently signed for Arsenal FC, will continue to wear PUMA Speed boots and will become a key asset within international football marketing for the global Sportlifestyle brand.

Olivier Giroud moved to the English Premier League this summer, having played in the French league for several years. With his 33 goals in only two seasons at Montpellier HSC and being top scorer in Ligue 1 for the 2011/2012 season, he built his reputation as both a skilful and intelligent striker, making him an ideal player for the PUMA Speed silo.

Additionally, breaking into the French national team in time for Les Bleu’s Euro 2012 campaign can’t have harmed his negotiating platform with Puma, either,

Olivier Giroud, commenting on his newly signed contract and choice of football boots said, “I have been wearing PUMA Speed boots since 2009 and they have always given me great confidence to play to my potential. Signing an international contract with PUMA is another great and positive step in
my career.”

Given Giroud’s move to the Premier League, it’s no surprise to see the big Frenchman become the second Puma signing offered an extended contract since the start of the season (the other being Marco Reus).

Continuing from strength to strength – can you think of any other uncontracted players Puma might snap up next?