Puma hosted a swanky launch event in the gallery of London’s Design Museum for the official unveiling of their new range of football shirts for the Africa Cup of Nations. 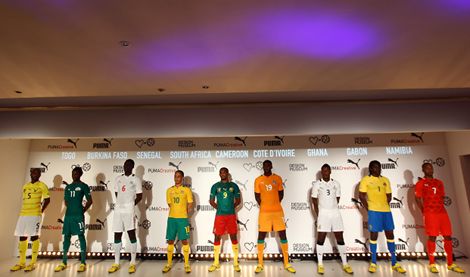 The German brand has established hugely strong ties with African football over the past three years, becoming technical supplier to ten Africa federations in total.

Despite the fact that Puma will only be backing five of those teams in Gabon & Equatorial Guinea this January (thanks to the unlikely failure to qualify of World Cup participants such as Cameroon, South Africa and Algeria) Puma had all ten of their new kits on display at a special launch event yesterday in London.

The new shirts for South Africa, Ghana, Ivory Coast, Cameroon, Algeria, Namibia, Senegal, Togo, Gabon and Burkina Faso were all on display – along with a player from each each country to model them, with attendees such as Asamoah Gyan and Samuel Eto’o, and Puma’s summer signings Steven Pienaar and Yaya Toure.

Each of the ten football shirts were designed by artists from each country, who hope their designs will inspire pride and passion from their team; and that the players'  and fans who don them will also know that no matter where football takes them, they will always have a bit of their home country on their jersey.

We love the incorporation of famous national symbols such as the Ivory Coast’s elephant and the Lions of Cameroon, and certainly think all of them really look the part on each shirt.

The full range of African Puma shirts will launch in December, with many of them getting their debuts this weekend during the international break.

Which one is your favourite?

Have a look through the gallery and let us know in the comments!

Written By
Ramsay
More from Ramsay
Wayne Rooney Loses his Sponsorship deal with Coca-Cola due to the recent...
Read More