Brown: A colour that very, very, rarely works on football boots. Probably the colour with the least ‘pop’ on the planet, it’s very tough to give that ‘shelf appeal’ to a pair of brown boots.

So, Puma clearly have employed some serious wizardry to get our pulses a-racin’ with the all-new Puma King Top Italia Limited Editions. 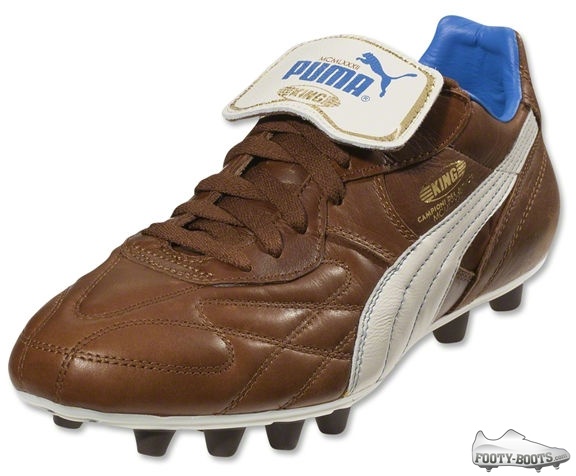 As if the Puma King ‘Top’ didn’t have enough retro styling going for it, the Puma King Top Italia doubles-down on throwback brilliance with chocolate leather upper, that forms just one piece of the retro charm on these cleats.

As the name suggests, these football boots are designed to celebrate Italy’s success on football’s biggest stage; the Azzurri Blue logo and lining honors the 1982 World Cup winning Italy team with the same colour as they wore on their shirts in that tournament.

As well as looking regal on the flank and tongue of The Top Italia, the gold branding reads Campioni Del Mondo, and marks 1982 with the Roman numerals MCMLXXXII above the King logo.

The contrast colouring is also masterful; rather than a sterile running white, Puma have employed an off-white that gives the boots a sort of lovingly worn-in feel perfect for their retro aesthetic.

Only 898 pairs will be released; a nod to the 1898 founding of the Italian Football Federation – making them a real collector’s item for fans of Italian football and Puma King boots.

But if you fancy rolling back the years and playing in them, you’ll find the Puma King Top Italia still packs all the features of the ‘standard’ edition.

From premium leather with form-stitched vamps in the toe-box to a Pebax outsole with specially-injected studs – the Top Italia is more than capable of doing a job on the pitch.

What do you think of these limited editions?

Limited Edition Puma King Top Italia, 8.9 out of 10 based on 15 ratings https://www.footy-boots.com/wp-content/uploads/2014/05/puma-king-top-italia.jpg

Written By
Kyle Elliot
More from Kyle Elliot
It's review time again! This time, it's our long-awaited hands-on with the...
Read More