Despite the Puma King Finale and the exceptional Puma King SL giving King fans enough choice in the heritage department, Puma are dedicated to re-issuing some of their classic King boots – including the Puma King Top DI – Regal Red / White. 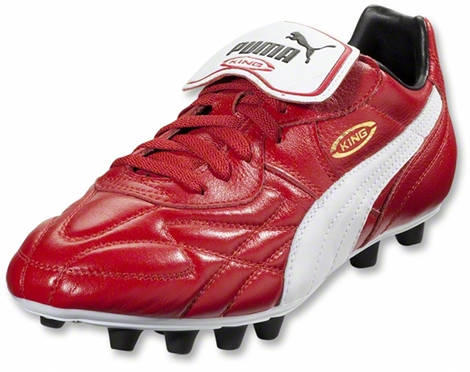 Styled after the 1982 model of the King, the Puma King Top DI is definitely a timeless performer.

Whilst the overall features of the boot have been lifted from the ’82 King, the distinctive design of the stitching on the toes was still widely being used on models of the King what were being used 20 years later in the early 2000’s – how’s that for tried and tested?

The Puma King Top DI uses full-grain Puma LITE leather for it’s upper, for a classic finish and lightweight feel (there is a King Top K DI with K-Leather, but that’s only available in black at the time of writing), which is augmented by a quilted vamp in the forefoot for a featherlight first touch.

The DI part of the name stands for ‘Direct Injection’, and that refers to the method used in constructing the classic moulded soleplate. Bi-Density Polyurethane is used to create the inimitable stud shape and layout of the Puma King Top DI, ensuring durability and minimised stud pressure. 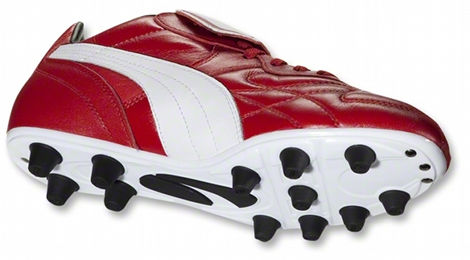 Finished here in the befittingly-titled ‘Regal Red’, these Kings are definitely designed for players who want the old-school aesthetic but still like to stand out, and would be a great way for any Manchester United, Arsenal, Liverpool, AC Milan or Atletico Madrid fan to show their allegiance on the pitch.

Weighing in at 334g or 11.8oz, the Puma King Top DI – Regal Red / White is definitely one of the heaviest boots on the market at the moment – but what else would you expect from such an old-school release?

What do you think to this new release? Let us know in the comments, or hit up the boot-o-meter to give us your thoughts!