Cameroon kick off their World Cup campaign later this afternoon against Mexico, so it’s only fitting that Puma are taking today to look back on one of the most style-savvy decisions ever made in the Indomitable Lions dressing rooms; wearing odd boots.

Inspired by the colours of the national team’s flag and kit, Cameroon’s Rigobert Song laced up two different coloured Puma Kings during France ’98. 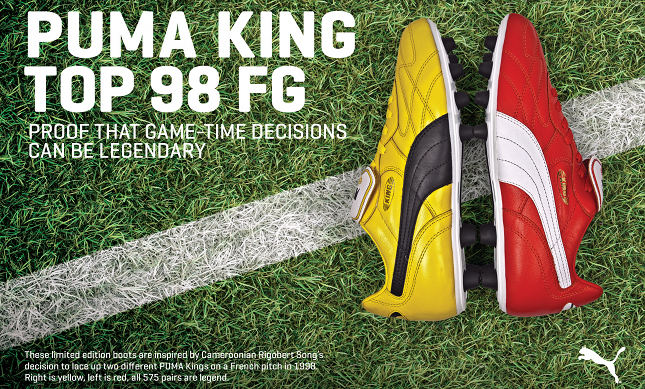 Since then, odd boots have become something of a statement made by some seriously confident (read as: eccentric) footballers – but nothing top’s Rigobert’s original effort.

Which is why, rather than trying to top it, PUMA have created 575 replicas to go on sale this summer at a cost of £135.

Crafted by PUMA from thin and lightweight premium K-Leather, the upper of these King Top 98 football boots forms to the contours of the foot for a glove-like fit and fantastic natural ball feel.

A quilted vamp, central lacing and fold over tongue all add to the ultimate comfort and classic look of the Puma King Top 98 FG while the lightweight direct injected PU outsole provides durable comfort on firm ground.

Song’s decision to stand out on the biggest stage of all epitomises the Puma ‘Nature of Believing’ motto that has dominated their campaign this summer.

The odd boots also inspired the PUMA Tricks range that has caught many an eye in the build up to the tournament and will be likely unmissable during the World Cup itself.

Are these throwback mismatched numbers a cop or drop for you?