It’s felt like the gang at PUMA can’t help but release a limited edition colourway or pair of football boots almost once every month this year… but sometimes we’re ruddy glad they have, as sometimes they’re the PUMA King SL Classico.

K-Leather and superlight construction united in holy matrimony at last, the PUMA King SL Classico is a remarkable football boots, well worthy of your time.

Way back in 2001, PUMA laid claim to the concept of an ‘SL’ version of an existing boot; the King. 2001’s King SL was an experiment, a challenge laid down to the design team, to take an existing boot and make it lighter. 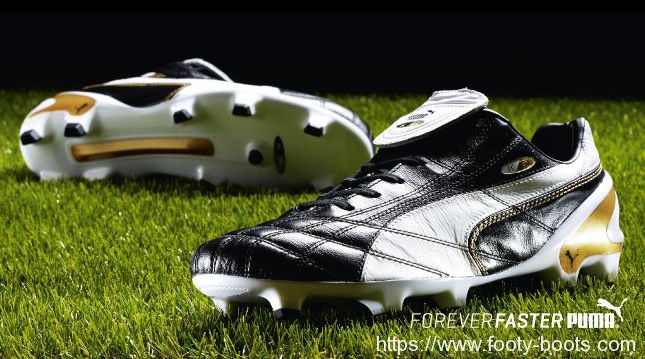 As we all know, since then, an ‘SL’ edition has probably now graced most of the big boot brands at some point, and now PUMA are honouring the OG with the King SL Classico.

Decked out in a black upper (what else?) and a classic white Formstripe (what else) up the flank, PUMA have done their level best to re-capture the styling of their now-fourteen year old product.

That means some lavish gold detailing on the soleplate and heel of the PUMA King SL Classico, as all as a throwback stitching pattern and an iconic foldover tongue.

For your money, PUMA are kitting you out with a premium K-Leather upper on the PUMA King SL Classico, in addition to the soleplate from last season’s King SL and this season’s King II EF+ – so you know these are going to perform well.

That said, you may well opt to not play in these football boots, as the PUMA King SL Classico will be limited to just 2001 pairs and carry a €299 asking price.

For long-time fans of the King, that will almost certainly worth the price of admission – for those who can’t see what the fuss is about, that price may as well be a King’s Ransom.

We’ll see ourselves out.

PUMA King SL Classico | Limited Edition, 9.7 out of 10 based on 8 ratings https://www.footy-boots.com/wp-content/uploads/2014/12/puma-king-sl-classico-profile.jpg