After the launch of thew PUMA King II EF+ (the equivalent of ‘SL’ for this generation), PUMA are back on the case with the matching PUMA King II – White / Orange.

A perfect option for players who put fit, touch, and a heritage style at the top of their ‘must have’ lists, the PUMA King II‘s second proper colourway is fittingly a classic White paint job.

As always, White look is a killer look for the inimitable K-Leather used on the forefoot of the King, showing off the quality of the materials used and the stitching pattern employed by PUMA. 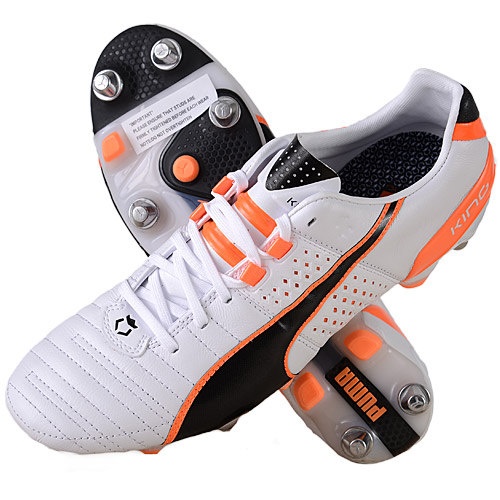 PUMA have cleverly used the bold orange to highlight the key tech on the new King II – as the Pebax soleplate studs and external heel counter are picked out.

Also on show are the ‘EverFit’ lacing loops that connect the lacing system at the top of the boot to the soleplate, allowing players to pull the King II flush to the sole of the foot for a confident, stable fit.

The PUMA King II seems to be sat in boot limbo a little in terms of professional uptake. The German brand took a gamble in switching previous ‘King’ players like Yaya Toure, Dante and Mikel Arteta into the evoSPEED or evoPOWER for the World Cup in the summer.

Now, this bold move paid dividends initially as the two-colour Tricks boots looked absolutely killer on pitch – but now the new King has landed, there hasn’t been a ‘headline’ player to wear them.

That said, the PUMA King name will always be a popular one with footballers, so we’ve no doubt we’ll start seeing more uptake, soon.

What do you think of the PUMA King II – White / Orange?

Written By
Kyle Elliot
More from Kyle Elliot
Was the Nike Superfly an idea ahead of its time? Or one...
Read More