One of the classics to end all classics, the Puma King gets it’s latest update in the form of the Puma King Finale – White / Red / Limoges! 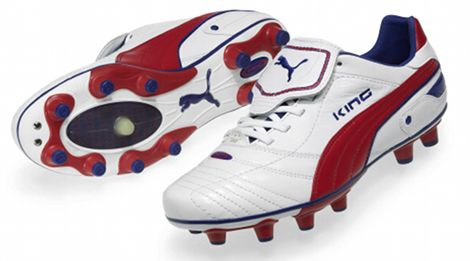 Releasing alongside the rest of the Puma Summer 2012 range, the King Finale looks exceptionally sharp in this White / Red / Limoges colourway.

Designed to fit in with the colourscheme set by the new Puma evoSPEED 1, the Puma King Finale – White / Red / Limoges joins the rest of the Puma family in this stunning new colourscheme for the big summer tournaments.

Whilst one of the most popular boots in the world, we’re struggling to think of any big-ticket players who will wear the King Finale in it’s new colourway at Euro 2012.

Key men Mikel Arteta and Thierry Henry both miss out on places in the Spain and France squads, respectively, whilst Phil Jones has moved to the PowerCat silo since the launch of the new 1.12.

We’re sure, though, that Puma will have no shortage of players to wear their new Kings across the Olympics and European Championships – it’ll just be up to you boot-spotters to work a little harder to find them!

Constructed of premium K-Leather around Puma’s award-winning AptoLast system, the Puma King Finale is the boot of choice for players who demand their boots look as elegant as their touch.