The boss, the master, the daddy of football boots is back with a bang, as the legendary Puma King is reincarnated for 2013.

When it comes to big names in the world of football boots, the Puma King is one of the single biggest in the game. Which is why we don’t envy Puma’s designers having to reengineer it every couple of years!

Do you go for a classic design to keep the old guard happy? Or should you try something modern to win over the youngsters? Well, the Puma King Finale was inspired by a classic model from the 1980’s, so Puma have gone with something far more futuristic for the 2013 edition.

Simply called the Puma King, the result is the most modern King yet from the German brand.

But that’s not to say Puma have abandoned any of the ethos that makes the King what it is. The 2013 edition features a premium leather upper for exceptional touch and feel on the ball – just as you’d expect from a classically-inspired football boot. 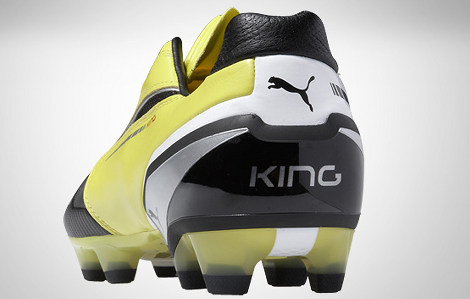 Puma also introduce touchCELL on the Puma King. Lining up alongside the powerCELL and speedCELL of the PowerCat and evoSPEED, respectively, touchCELL is an umbrella term for the performance-driving technologies within the new Puma King.

A thinner, textured tongue offers a lighter King than previous incarnations, offering a better touch on the ball and a ‘truer’ energy transfer on shots, long passes and crosses. 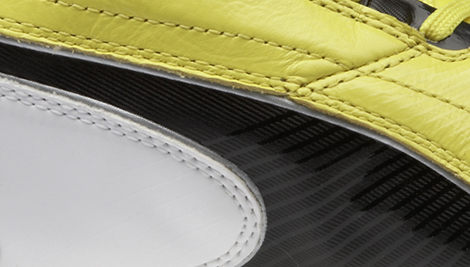 As with many boots in it’s category, the Puma King will use a mixture of lightweight synthetics and natural leather to create a lightweight control-focused boot. Whilst the forefoot is classic leather, the iconic Puma FormStripe and heel are performance microfibre.

Something that’s present on most Kings, the 2013 edition will feature a hefty heel counter, offering protection against jealousy-born tackles and heel taps, but also offering stability and protection.

The soleplate is lightweight Pebax with a mixture of angled and traditionally rounded studs, resulting in a pressure-distribution and stability when you need it, and quick turf-release and support where you need it.

Puma also continue the use of their excellent AptoLast system – a specially designed last, the boot naturally starts off mimicking the shape of the foot, allowing fast break-in and a more natural ball feel.

The new Puma King and ‘CELL’ lines also seem to be signalling a change in how Puma manage their players. Whilst some professionals on Puma’s books seem to change boots every week, Puma are confident that Yaya Toure and Mikel Arteta will represent the new King on Premier League pitches, with rumblings that Cesc Fabregas might be joining them in Spain.

Personally, we think this is a great new look for the Kings. Flashy and modern might not be what you’d expect fro this historic name, (especially in this Yellow / Black / White colourway!) – but it’s great to have something that contrast so well to the last release.

With a new look and a focus on control – what do you think of the new Puma King for 2013 and beyond? Let us know in the comments!