To command an annual salary of £8 million a year, Puma’s 44 year old CEO Jochen Zeitz must be doing something right. Chief executive of Puma since 1993, Zeitz, is credited with transforming the fortunes of the German football boot brand, from being a loss making outfit to a global giant. Trained as a marketer by the American multinational Colgate-Palmolive, he speaks five languages, never wears a tie, keeps a holiday home in Africa, and flies his own planes.

Only this week, Puma revealed impressive 2007 sales figures, giving optimism for a successful 2008 (see article). Despite strengthening its position in the sports lifestyle arena, Puma still trails its German rival Adidas and America’s Nike. Both are five times its size, having quickly followed Zeitz’s “sports lifestyle” path. Can Puma thus ever catch rivals Nike and Adidas?
“Not interested in catching them,” he shrugs. “Whether you are three, two or one is meaningless. You need to be relevant and innovative; that’s what counts.” 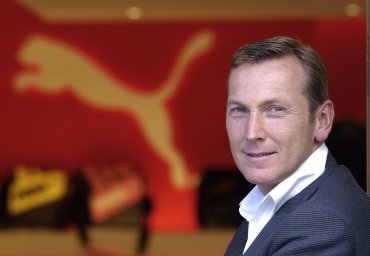 Puma was founded by Rudolf Dassler, brother of Adi Dassler (Adidas) in 1948. When Zeitz joined, the company was in turmoil – it had slumped into loss after the glory years of making Pele’s football boots. “It was a mess, very bureaucratic, very traditional, very German-centric,” says Zeitz, frowning. “Our export manager could barely speak English.”

But the difficulties gave Zeitz the opportunity to rise fast. “We had three chief executives in two years, each one promoted me. Then we were taken over by a Swedish owner, who asked me to give a presentation about what I thought was wrong.” The presentation won Zeitz the top job. He was just 29. “Everyone thought I would only last six months.”

He started by laying off staff, closing unprofitable production lines and warehouses. By 1994 he had recorded Puma’s first profits since 1986. Three more years of retrenchment were followed by five years of investment. Most importantly, says Zeitz, the brand was repositioned. “Puma in the 1980s was a cheap brand. I said let’s become premium. Let’s bring fashion and style into play.”

And he made Puma cool with a series of gambles, such as pouring money into Jamaican reggae. “We are a sports brand but we want to be something else, too. Jamaica is perfect. There are athletes but also the atmosphere, the climate, the music, the lifestyle.” Design coups like the bodysuits worn by Serena Williams and the Cameroon football team kept Puma in the headlines.

The Beijing Olympics and European football championships promise a good summer ahead. Puma sponsors World Cup winners Italy. In addition, only recently Puma has been linked with a possible takeover bid for fellow football boot brand Umbro. Straight talker Zeitz however dismisses this possibility out of hand: “Too much blood, sweat and tears.” “Not sexy enough,” he says. Creating sexy business is Zeitz’s passion.