Football boot brand Puma has announced a multi- year extension of its kit sponsorship agreement with African Cup of Nations hosts Ghana through to the 2014 FIFA World Cup.

The announcement was made by Puma CEO Jochen Zeitz and Ghana FA President Kwesi Nyantakyi during a special reception in Ghana’s capital of Accra one day after the 2008 African Cup of Nations kicked off with a 2-1 Ghanian victory over Guinea, courtesy of a fantastic Sulley Muntari strike in the closing minutes.

“Ghana was one of the most inspiring stories of the 2006 World Cup, capturing the world’s attention with their exciting style of play and passion for the game,” said Zeitz. “Puma is proud to extend our partnership with them for many years to come and we wish The Black Stars the best of luck during the next three weeks in the African Cup on their home soil.” 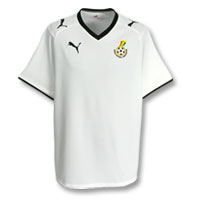 In 2006, the team made its first-ever World Cup appearance, upsetting the Czech Republic and the United States in group play before falling to Brazil in the Second Round .

“We are proud to be partners with such a global brand that has made a commitment to football in both Ghana and the African continent on the whole,” said Ghana FA President Nyantakyi. “Puma has consistently delivered on its promise of support – and this is further evidence of Puma’s confidence and commitment in their relationship with the Black Stars and Ghana Football.”

Ghana plays its second ACN Group A match against Namibia on Thursday evening.

Written By
Felipe
More from Felipe
It's the conclusion of the English domestic season with Everton meeting Chelsea...
Read More