And here we are looking at another fantastic football boots' brand and it’s greatest XI Players – this time out it’s the big cat of Puma!

Puma have had some of the greatest attacking players ever to have existed, and it’s a real struggle to fit them all in a single team!

Puma, however, haven’t had as bigger selection of defenders on their books, so we’ve decided to give the Puma XI a very attacking-minded'  3-4-3 formation – and with players like Maradona and Pele on their books, who wouldn’t!? 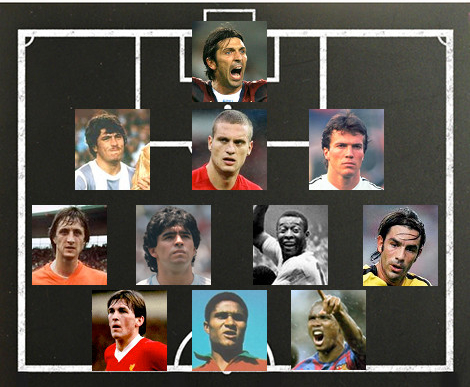 Despite Italy being one of the most inconsistent national teams in living memory ‘GiGi’ is still considered by many to be one of the greatest in this generation of goalkeepers, and our choice to man the sticks for our Puma XI.

The driving force behind Italy’s 2006 World Cup success, shutting out every opposition Italy came up against for an incredible 453 minutes. Buffon has also claimed numerous individual honours for club and country; including the 2003 UEFA Champions League Most Valuable player, a place in the 2008 European Championships Team of the Tournament and the 2006 Yashin Award.

Captain of the 1978 World Cup winning Argentina side, centre-back Daniel Passarella was called “El Gran CapitÄ‚Ë‡n” (the Great Captain) because of his leadership ability, his passion, and his organisation prowess on the field.

He was a defender who often joined the attack, and helped generate and finish offensive plays. At some point, he became football’s top scoring defender, with 134 goals in 451 matches, often pinging in goals off his Puma King football boots

Part of Puma’s current stable of stars, Vidic was plucked from Spartak Moscow by Alex Ferguson and has since established himself as one of the best no-nonsense defenders of this era.

Favouring the Puma PowerCat football boots, Vidic has won 11 trophies with Manchester United and has a happy knack of bagging goals for the Reds, having notched up 12 goals in 5 years at the club.

Descibed by Puma XI team-mate Diego Maradona as ‘the greatest rival I ever had’ and a career that spans nearly 750 games, there can be little doubt of Matthaus quality in the sweeper position.

Best known for his time in adidas' football boots during his time for Germany, Puma proudly boast him as one of the great players of the 1980’s who prefered the King.

Starting off our, very, very attacking midfield is 3-time Ballon D’or winner Hendrik Johannes Cruijff was a key part of the 70’s Dutch footballing masters that inspired the ‘Total Football’ that is so highly desired, even today.

Whilst Cryuff faced accusations of being aloof and languid during his international career; Cryuff was fiercely loyal to Puma – even going as far as wearing an orange shirt with only two black stripes – as opposed to the rest of his team-mates who wore the traditional three stripes of adidas.

Honoured recently by Puma with the King Diego Finale football boots, Maradona is capable of the spectacular seemingly on a whim – hence his award for Goal of the Century for his second against England in 1986.

Another Attacking Midfielder that we’ve dropped in behind our front 3, Pele is the sharer of the Player of the Century award with Maradona.

Now with his name attatched to his own brand of football boots, we hope that history doesn’t forget Pele’s extraordinary history in Puma, from the ‘gentlemen’s agreement’ between adidas and Puma that was meant to stop either signing the Brazilian star, to his infamous 1970 boot tying, that delayed kick-off in a world Cup game an baited TV cameras from every country in the world to zoom in on his football boots.

Portuguese-born French star Robert Pires was a key representative of Puma in the early 2000’s, on of the few marquee signings on their books in that period.

Part of the legendary Arsenal ‘Invincibles’ and the France squad that held both the World Cup and the European Championships, Pires’ influence as a playmaker speaks for itself.

Another player who flirted with both adidas and Puma football boots, the great Dalglish was in the Puma King for much of his time at Liverpool – making him eligable for a place in our Puma XI.

In a career that spans 21 years, Dalglish won the old First Division' 6 times and the European Cup 3 times, netting 336 goals for clubs and country in an astounding 823 appearences.

The Black Panther’s career scoring record speaks for itself – at Benfica Eusebio averaged better than' a goal per game across 14 seasons, with' 317 goals in' 301 appearences.

The legendary Puma King wearer had' a fearsome and deadly accurate right foot, and won the Portuguese first division a ludicrous 11' times' during his tenure.

' Arguably the greatest African striker of all time, Samuel Eto’o ticks all the boxes for a great player. Not only is he a fantastic finisher of the ball with pace to burn, Samuel Eto’o has headed various initiatives including Puma’s 2010 Africa Unity campaign and is outspoken on the' issue of' cutting Racism out of football.

A long-time Puma wearer, Eto’o is the main man in Puma’s V series – having bagged 234 goals off his speed football boots, over 100 of them in Barcelona colours.

This is just our dream team – who would be in yours? Mix it up and change formation, push players a little out of position and' post them in the comments below!