Following on from the MB45 evoPOWER Tricks last month, PUMA are at it again with a one-off colourway for another of their stars, as Marco Reus prepares to lace up the PUMA evoSPEED MR Tricks.

Featuring the same half-and-half split design as the summer’s World Cup Tricks football boots, the PUMA evoSPEED MR Tricks are instead a bright yellow and black colourway to honour the home colours of Borussia Dortmund.

As with Balotelli’s patriotic efforts last month, PUMA have talked with Reus about what causes and beliefs are near to his heart, in an effort to bring some of that inspiration to his new football boots. 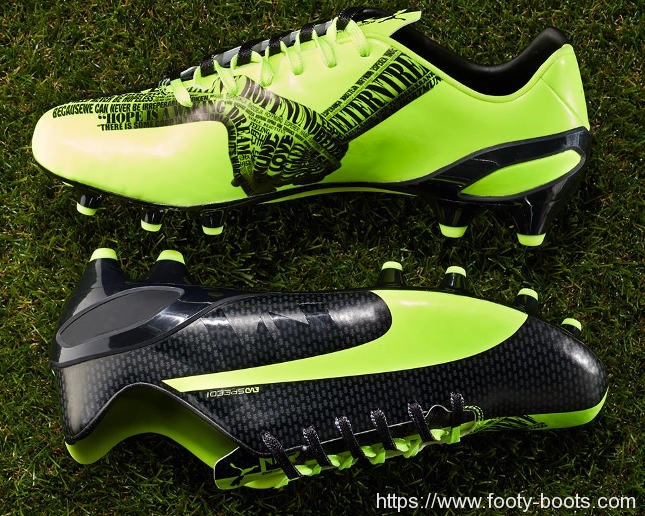 The PUMA evoSPEED MR Tricks not only boast the colours of Borussia Dortmund, but also nods towards the Children’s charity that work with the team – something Reus is passionately involved in.

On this instep is a huge typography graphic containing words and phrases to inspire hope in both English and German.

All these words form a graphic of two holding hands – one belonging to a child, the other a young man. 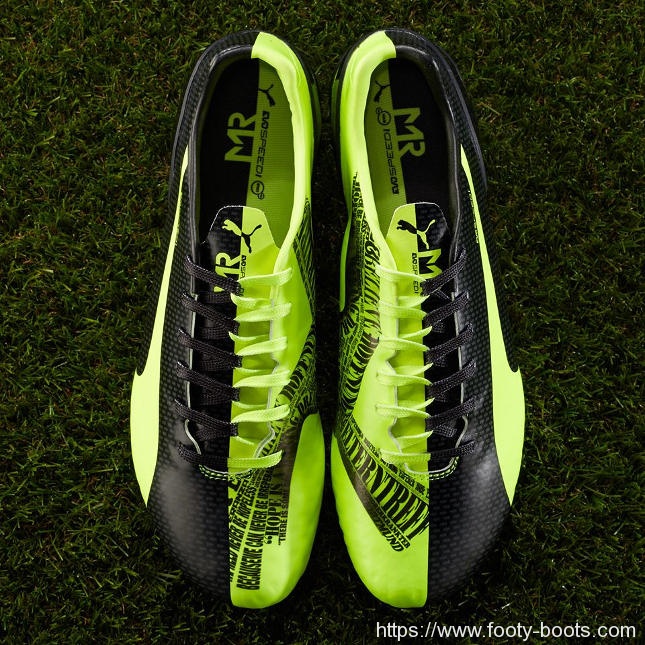 That connection is also represented in the most minute of details on the boot, too. The 3D GripTex upper might look like dashes or dots from afar, but up close these are actually icons – stylised interpretations of young boys and girls only visible on the black part of the boot.

Finally, there are some subtle call-outs to Marco Reus’ initials on each shoe, with an ‘MR’ logo overlapping the iconic PUMA Formstripe on the lateral flank of each boot.

You’ll also find that same logo on the tongue of each shoe.

Another neat touch from PUMA is shipping the PUMA evoSPEED MR Tricks with ‘runners loop’d laces, so that each boot retains it’s 50/50 split of colour, down to the smallest detail.

What do you think to these limited edition Marco Reus football boots?