After a successful few months since it’s launch in the Spring, the new Puma speed silo gets a fresh new look with the Puma evoSPEED 1 – Silver / Team Green. 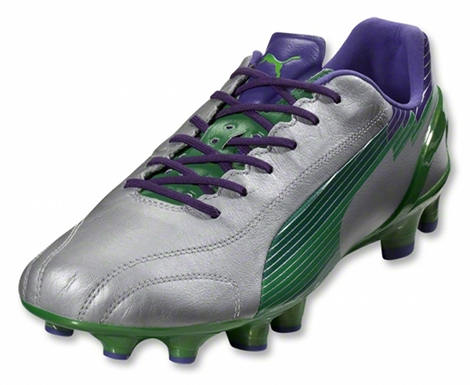 After the stunning White / Red / Limoges debut colourway, it looks like Puma are heading down the ‘audacious’ path for their latest silo – hardly surprising, given most speed boot tend to be on the bright side!

Whilst we’ve seen plenty of silver football boots throughout the years, they’re usually paired with something reasonably reserved – Red, Black or Blue, for example. 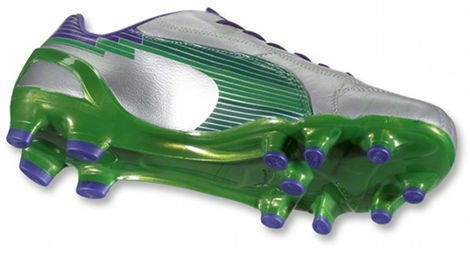 But on the Puma evoSPEED 1, the flashy silver upper looks even more outrageous when teamed with Green and Purple!

Since it’s debut in May, the evoSPEED' range has had a dynamite summer; Germany’s Mario Gomez looked unstoppable wearing the boot in Euro 2012, Sergio Aguero, Yaya Toure and Radamel Falcao have started the seasons in outstanding form and new stars are scrambling to wear them.

In addition, Puma have launched the evoSPEED' moniker across their whole range of sporting gear; cricket, motorsport and athletics all have their own evoSPEED footwear – with Usain Bolt winning Olympic Gold in his cleats at London 2012.

As for tech specs, the Puma evoSPEED 1' – Silver / Team Green' has all the trimmings we’ve come to love from the evoSPEED; unique soleplate with a mix of conical and bladed studs, EVERFIT cage for improved stability, 181g weight point and a choice of either single-piece microfibre or K-Leather (pictured) for the upper.

Expect an early October launch for the Puma evoSPEED 1' – Silver / Team Green, and a price point of around £140-£150, depending on your choice of upper and soleplate.

Written By
Kyle Elliot
More from Kyle Elliot
The inventor of the adidas Predator has labelled modern football boots a...
Read More