Following on from the ghostly White/Puma Silver edition that kicked off the new year, Puma are at it again, kitting out the evoSPEED 1 in another signature colourway!

This time, goal-machine Radamel Falcao is the lucky recipient of some bespoke boots, as he steps into this incredible Puma evoSPEED 1 Graphic.

Similar in colour to Cesc Fabregas’ signature colourway, Falcao’s evoSPEED' is officially designated as Blazing Yellow /' Medieval Blue, and as a combination, it’s very evocative of the flag of Falcao’s native Columbia.

Whilst we’re used to seeing some fairly outlandish designs from Puma’s ‘Graphic’ releases, the Puma evoSPEED 1' Graphic' is actually quite understated – in terms of design, we mean – that colour combo is anything but understated! 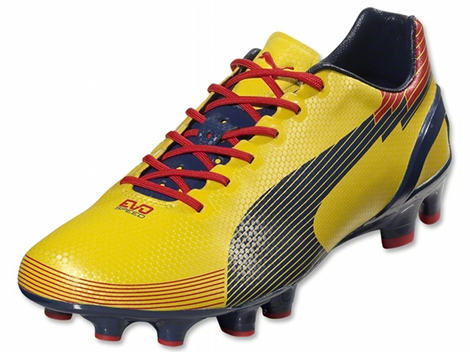 With contrasting laces and tongue, the red lines across the toe-box are the only real graphical element that differs this edition from any other evoSPEED – with the technology in remaining the same.

Boasting an everFIT cage in the midfoot for stability, lightweight Pebax outsole and Griptex print for ball feel, the Puma evoSPEED 1' Graphic' is everything we’ve come to love about the evoSPEED in a bold package.

Suspended at the time of print, we’re yet to see Falcao on the pitch in his new football boots, but it will be interesting to try and spot the differences between the retail version and the model he wears on the pitch.

A fairly recent addition to the Puma family of players, Falcao has already earned a reputation for being very particular over the components used on his boots, often favouring a hybrid King SL outsole and a one-piece leather upper.

What do you think to this colourway? Let us know in the comments!

PUMA EVOSPEED 1 GRAPHIC – FALCAO SIGNATURE, 8.8 out of 10 based on 21 ratings https://www.footy-boots.com/wp-content/uploads/2013/01/puma-evospeed-1-graphic-falcao.jpg