It’s no secret that Puma are fast becoming the boot of choice for top-level athletes and amateur players alike, and their latest release looks like it definitely won’t stop that momentum! The Puma evoSPEED 1 – Blue / Green has landed!

Weighing in at 181g (or 192 in the K-leather model), the evoSPEED 1 falls into the category of elite sub-200g speed boots that always prove to be popular with top players.

Designed to work in perfect harmony with the foot, the Puma evoSPEED 1 is all about optimising speed (of course) and maneuverability of anyone that wears them, using a slew of new technologies to optimise feel and fit whilst keeping that weight down. 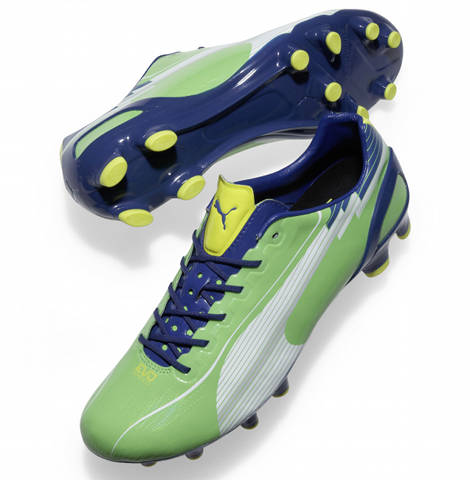 Starting from the group-up the Puma evoSPEED 1 – Blue / Green continues using the DuoFlex soleplate (FG), constructed from high-density Pebax for optimum stability, whilst unique grooves and channels allow the front of the foot to move and flex naturally for optimum agility, with a mix of bladed and conical studs for superior traction.

On the inside of the boot, Puma’s foot-mimicking AptoLast ensures a flush fit and exceptional comfort, whilst the EverFit cage locks the player’s midfoot in place, reducing slippage and ensuring stability during high-speed play. 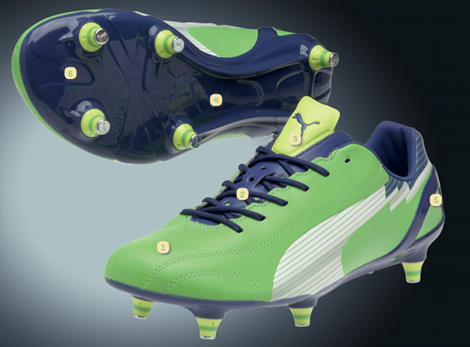 Referred to previously as just a ‘mono-layer microfibre’, the evoSPEED 1 – Blue / Green marks the first time Puma have named the upper on the synthetic version of the boot. Now called speedCELL, the super-thin upper is coated in a 3D film to improve grip and feel in all conditions.

Whilst Puma have been letting players pick and choose their colourways, the evoSPEED 1 – Blue / Green is set to make a huge impression in this week’s Champions League games, with Manchester City’s Sergio Agüero and Gaël Clichy, Atletico Madrid’s top star Radamel Falcao and Arsenal striker Olivier Giroud set to don them from tonight. 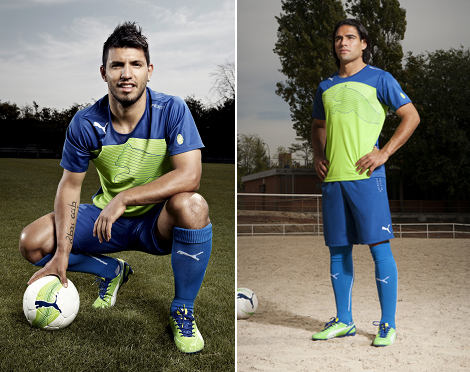 Goal Machine Falcao was on hand to talk about the new release, commenting, “I really like all the different colour variations that PUMA offer me, because I really enjoy difference and like when boots stick out on the pitch. I have been playing in the evoSPEED since May this year and I feel extremely confident wearing them. The boot is perfectly suitable to go up to speed quickly, which I really appreciate. And the combination with some different colours makes the boot stand out from others in the market”.

Behind this new Puma evoSPEED 1 – Blue / Green stands a full green and blue coloured collection that answers every athlete’s need for speed by taking performance technologies and innovations and incorporating them in footwear, apparel and accessories.