When you feel the need, the need to move extremely quickly, then few boots get the job done quite like the PUMA evoSPEED.

Whilst the first edition’s slick upper was a little lacking in the control stakes, the evoSPEED 1.2 fixed almost every complaint with PUMA’s now-signature speed boot. As we move into the new season the PUMA evoSPEED 1.3 looks to fine-tune the formula again to create the perfect cleat for speed-merchants like Sergio Aguero, Marco Reus and Radamal Falcao.

Thanks to some minor facelifting in the looks department, PUMA have once again created a boot that really has that fast aesthetic locked down – the low-cut ankle and central lacing system combine with the sleek branding and silhouette for a boot that really looks fast, without making the boot inaccessible to people who like a more traditional fit.

And despite a similar look at first glance, PUMA have equipped the evoSPEED 1.3 with some new features. Notably, the Upper is now a monolayer synthetic upper, which PUMA say is lighter than the last model.

This new material lacks the leather-like finish of the 1.2’s upper, but it is distinctly thinner and not completely without texture of it’s own. Enhancing that is the new GripTex finish. Sporting a new, more angular layout, this again follows the trend in the upper of lacking the 3 dimensional, tactile feel of the 1.2, PUMA say this is mostly for wet conditions.

When players ask us for a football boot that works well with an average-to-narrow foot shape, one of our first recommendations is the evoSPEED, and fans of the boot’s streamlined shape can breath a sigh of relied knowing that the 1.3 is again great for a slimmer foot. 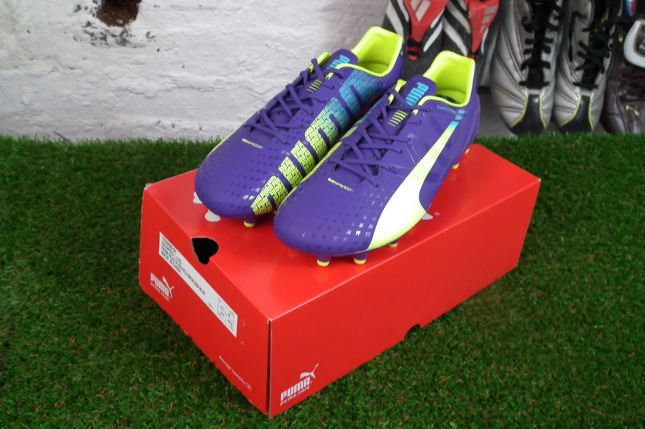 A big part of this is the central lacing system, which provides just the right amount of depth to allow for a really adjustable fit, and pulling the boot snug in the mid foot.

That mid foot also plays host to the new External version of the EverFit Cage; a mainstay of the evoSPEED line, PUMA have shifted it to the outside of the boot on the 1.3 for a number of reasons.

Most practically, this new system allows the boot to adjust more with the player’s desire for fit; rather than having the lacing from the everfit cage separate as on the 1.2, here the two are intrinsically linked for a symbiotic fit. 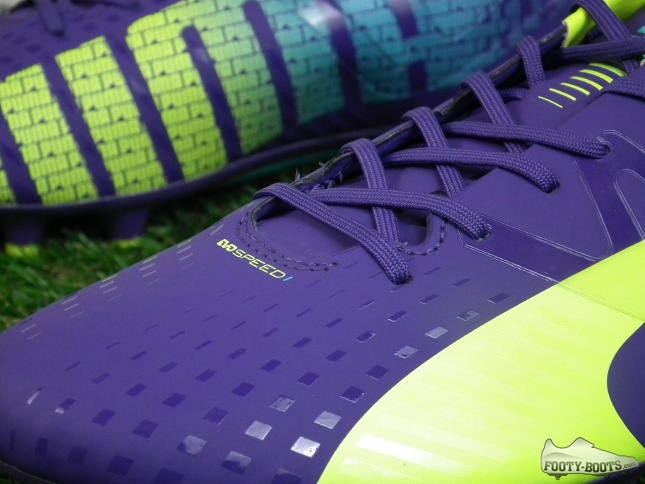 PUMA also say this locks the foot closer to the footbed enhancing agility via reducing wasted energy; we’ve seen similar concepts on the adidas Nitrocharge and Mizuno Basara recently, so it makes sense for PUMA to want to enhance this feature on their new model.

The soleplate will seem much more familiar to fans of the evoSPEED line. The 1.3 retains the Duoflex forefoot system for agility where it matters most, allowing for swift changes of direction when planting the toes.

PUMA have again made the studs on the new evoSPEED even more conical; a decision likely enforced by player feedback, given the amount of players who used to wear bespoke versions of the boot with a PUMA King soleplate.

The same material runs under the whole soleplate as a single piece, culminating in an external heel counter; something of a rarity on speed boots these days, we’ve no doubt that some players will value that added reenforcement at the base of the Achilles.

Speaking of reenforcement, the SpreedTrack system returns from the 1.2, keeping the mid foot and heel locked in with the direction of the boot, creating a more responsive platform for quick turns and an arrow-straight footbed when sprinting flat out.

In our opinion, PUMA have brought just enough to the new evoSPEED 1.3 to offer a worthy upgrade to the 1.2, however there is an ‘if it ain’t broke’ feel to some of the most visible aspects of the boot.

Written By
Kyle Elliot
More from Kyle Elliot
We see what's going on inside Nike Phenomenal House this week, with...
Read More