PUMA’s evoSPEED range has won no shortage of plaudits since taking over from the v1 series in 2012, with a combination of sleek, low-profile design and a minimalist, player-first approach to speed.

But when you’ve stripped everything back from a boot, justifying a new version every year can be more than a little tricky. Does the PUMA evoSPEED 1.3 provide enough new features to justify a fresh payout from an existing wearer? We found out as we slipped on a pair this week.

One of PUMA’s big selling points this season is the new upper. A teijin synthetic micro fibre, PUMA’s new choice of upper on the new evoSPEED 1.3 allows boot to bring a thinner, more lightweight touch and feel on the ball

A noble goal, for sure, the evoSPEED 1.3 does offer a significantly improved touch on the ball than the previous model, with the new 3D griptex print on the front compensating for the removal of the leather-like grain on the upper that we saw on the 1.2. 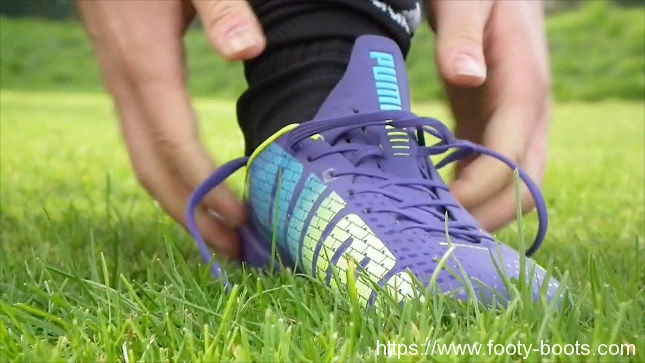 However, this thinner, lighter upper does have a drawback; we certainly found it took much longer to break in than the previous model. That’s not to say the end result wasn’t worth that investment, but we found the evoSPEED 1.3 is a boot to be worn in over a couple of weeks rather than a couple of days around the house.

A stiffer, more durable finish to the Teijin leaves the boot feeling very tight during the first few wears, particularly when pulling the laces nice and snug. 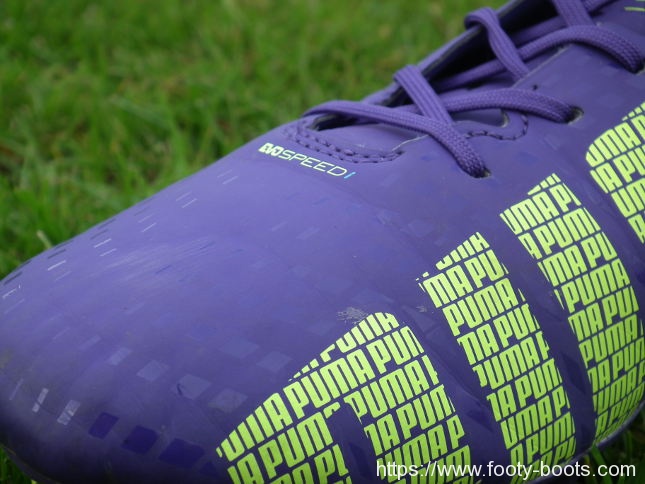 Even though that initial period stops the boot being at it’s best for a while, the PUMA evoSPEED 1.3 isn’t all that uncomfortable whilst it’s happening. We found an initial feeling of tightness came from lacing the 1.3 too tightly, so simply slackening the laces after a few minutes of really stretching them out helped eliminate and hot-spots or discomfort.

Beyond that, once the boot is fully moulded to your feet, it’s a very accommodating boot to play in, with our only word of warning being for players with very wide feet – as with a lot of speed boots out there at the moment, these simply aren’t going to be the boot for you.

But for everyone else, the new evoSPEED are certainly going to be a comfortable ride. One of the reasons for that is the outsole. Mostly composed of conical studs, the evoSPEED’s traction plate is very good for dispersing stud pressure and boosting comfort, whilst the longer-than-average length still maintains a good level of ‘bite’ into the turf.

Performance wise, that thin upper is tidy to strike a ball in, whilst the SpeedTrack spine under the heel and midfoot stops the boot feeling sloppy – instead delivering a nice level of ‘ping’ and purchase when really slamming your laces through it.

Pro’s of the evoSPEED 1.3 are certainly plentiful, with the upper a definite upgrade over the 1.2’s material, great all-around performance and above-average comfort the likely draws for pro’s like Aguero and Falcao. 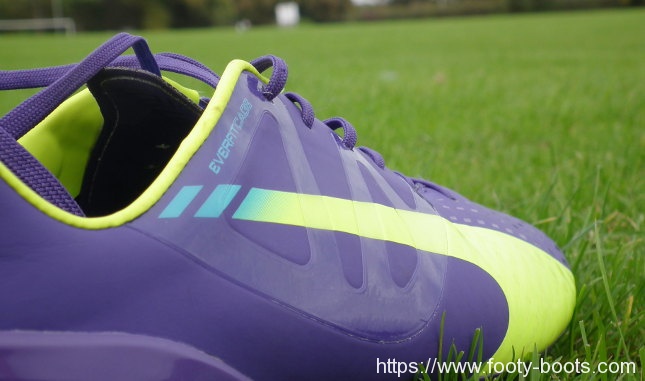 On the flip side, it could be argued that the boot doesn’t make a huge leap over the previous model. Yes, the upper is a step-up, but the headline change to an external everFit cage doesn’t offer a massive upgrade.

Bottom line, if you’re a PUMA speed boot fanatic, these are as good as it gets – but if your 1.2’s have a lot of life left in them, don’t feel like you’re missing out drastically with the 1.3’s – you can afford to hang fire a little longer until the colour way choice is greater.

Written By
Kyle Elliot
More from Kyle Elliot
One of our favourite accessories makes a return with an upgraded design...
Read More