To celebrate the launch of this summer’s ‘loudest boots’, Puma invited us to a special event where we could push their boots to the extreme. Scott chose to test the evoPOWER and after an early night, he made his way into the heart of London….

As a quick recap, the Puma Tricks pack was released to celebrate this summer’s football tournaments, namely the Euro’s and Copa America.

The evoPOWER and evoSPEED Tricks boots have a dual coloured boot concept which was inspired by Cameroonian Rigobert Song’s World Cup moment in 1998. ‘That moment’ was when Rigobert picked up two different coloured Puma King boots, one red, one yellow and laced them up. Puma have jumped on this and have taken two pop colours in the form of pink and yellow to colourise the two boots.

We tested the evoPower Tricks in a series of three challenges. Each challenge focused on a feature of the boots which enabled me to get a good feeling of how the boot really performs. 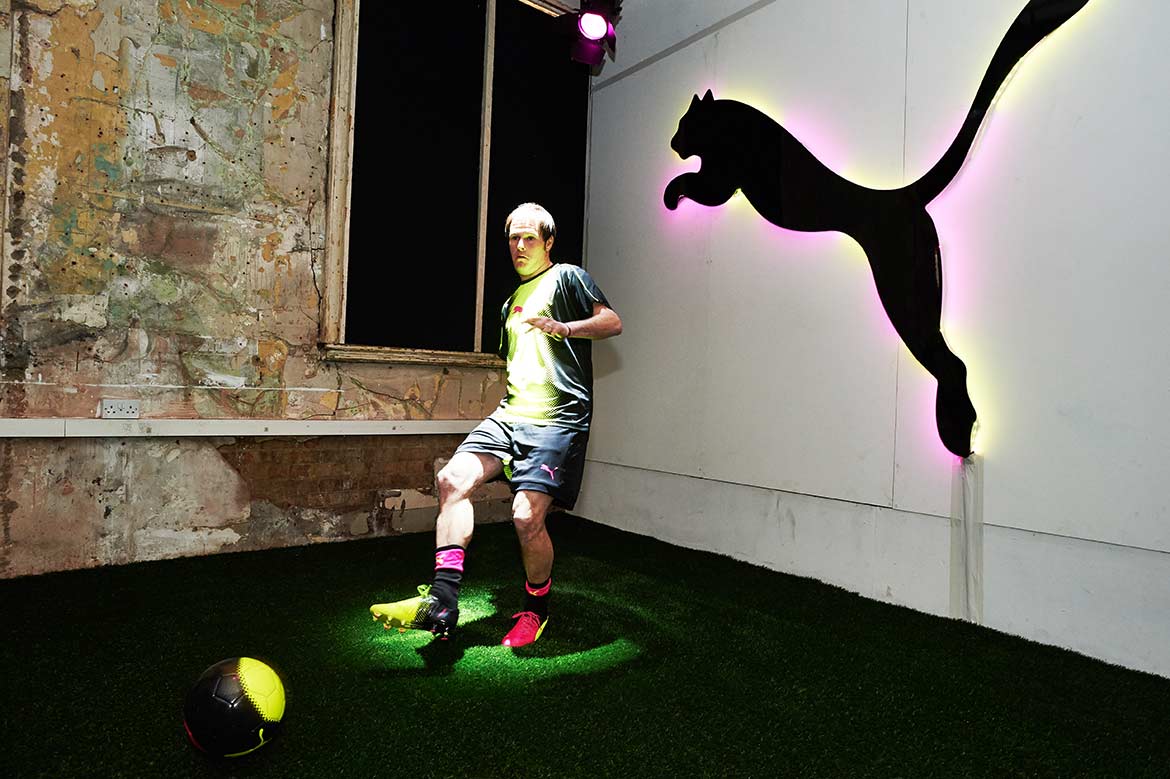 Three players spread out in a darkened room. When a spotlight shined on one of the players, I had to quickly pass the ball to them. The ball was passed straight back to me and I had to bring it under control in two touches or less.
Having only had the boot on a few minutes, this challenge was putting the comfort of the boot under pressure. The main thing for me though was how the AccuFoam padding in the upper would dampen the ball on first touch and how it feels when you need to make a quick, short accurate pass.
Challenge 2 – Dribble, Sprint and Cut 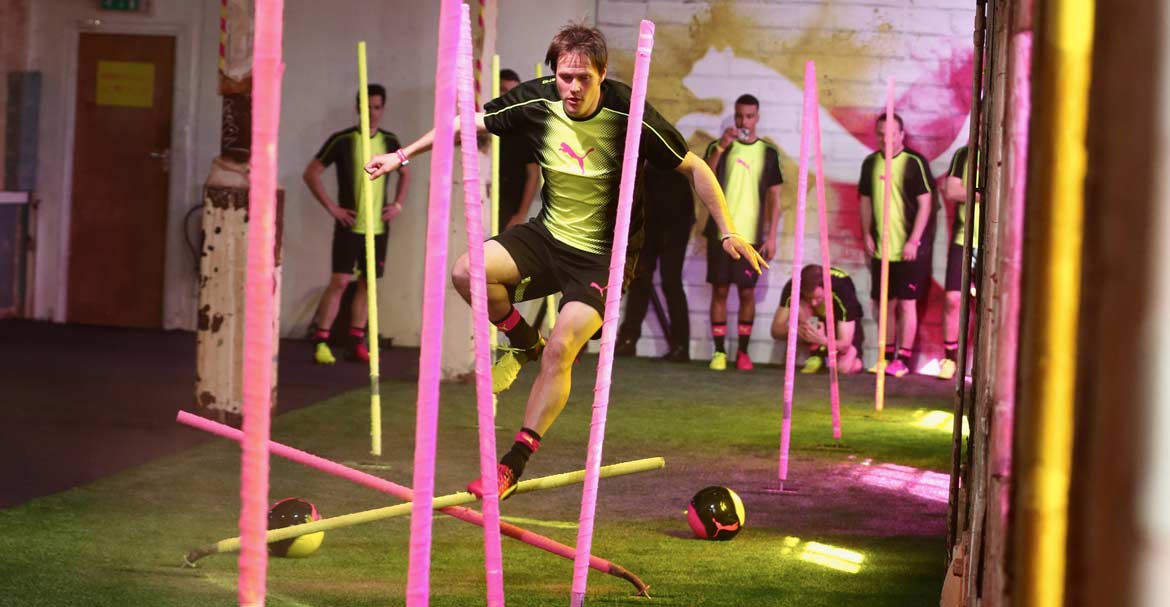 Okay, so nothing new with this drill. It’s a classic that most people will be familiar with; Dribble at full speed through the slalom poles, jump to the max, turn and then cut back through the poles.
Puma say the evoPOWER boot emulates the barefoot bending and kicking motion. This drill enabled me to test this, as well as the support of the boot whilst cutting in and out of the poles. Also of interest was how the traction of this soleplate stood up, as this drill was all about moving at maximum speed.
Challenge 3 – Accurate Shooting 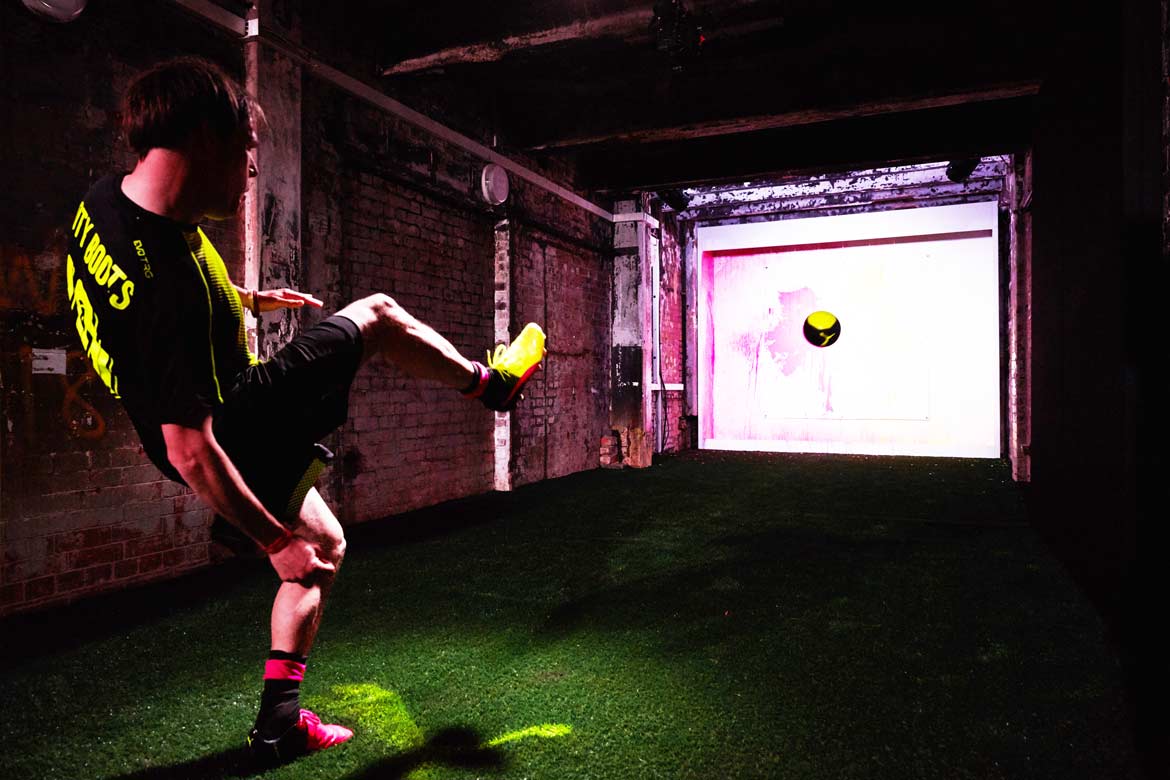 So this is where the evoPOWER should come into its own, shooting. Various targets popped up at different heights and in various sizes. It sounds simple, but from a dead ball the targets had to be hit. Time to test the AdaptaLite Upper which is a one way stretching material created to enhance my shooting accuracy and power!
Looks 3/5

When I got my first glimpse of the Pink Glo left boot and the right boot in Safety Yellow of the evoPower’s I though these are smart. Puma will want as much attention during the summer tournaments and these boots will stand out.
They’re not for everyone though, some find odd boots a step too far, particularly in yellow and pink! I’m with Puma on this one, play it Loud!
Maintenance 5/5

Okay, hands up, I’ve only had these boots a few hours. Fortunately I’ve got another colourway which I’ve had for a few months which I’m basing this on.
The evoPOWER is one of the easiest boots I’ve had to clean. There are not too many little crevices to clean out, the upper allows you to wipe muck straight off with a damp cloth and the firm ground soleplate is a breeze to wash down.
I’m also impressed by the robustness of the evoPOWER 1.3 – it has improved on its predecessor and with a bit of care and attention will be a long standing servant to you.

The easy bit, the evoPOWER runs true to size and fitted me perfectly.

The AdapLite upper is very forgiving, so even those with odd shaped feet will find that the upper flexes and gives you a snug fit. I was in the boot one minute, then climbing stairs in them the next, before running through the three challenges. At the end, my feet showed no signs of soreness at all.

One of my concerns was how would your first touch be with all the AccuFoam built in to the upper. Challenge 2 helped me forget about any concerns.
As the ball was pinged in to me from all angles the boots were amazing. They include just enough padding to assist your control, without losing the sense of touch you need.
Performance 4/5

Two things stand out for me here. Firstly, the striking of the ball. I was aiming at targets, hitting the ball hard and apart from my own shortcomings, the boot stood up well and gave me great purchase on the ball. Clean strikes felt great, but I couldn’t hand on heart say that I was getting more power than usual.
Traction with the soleplate was terrific, but the stand out feature for me is the flexibility of the soleplate. It is incredibly flexible without feeling ‘too flexible’. This is one of Puma’s big features on the evoPOWER and to good reason. 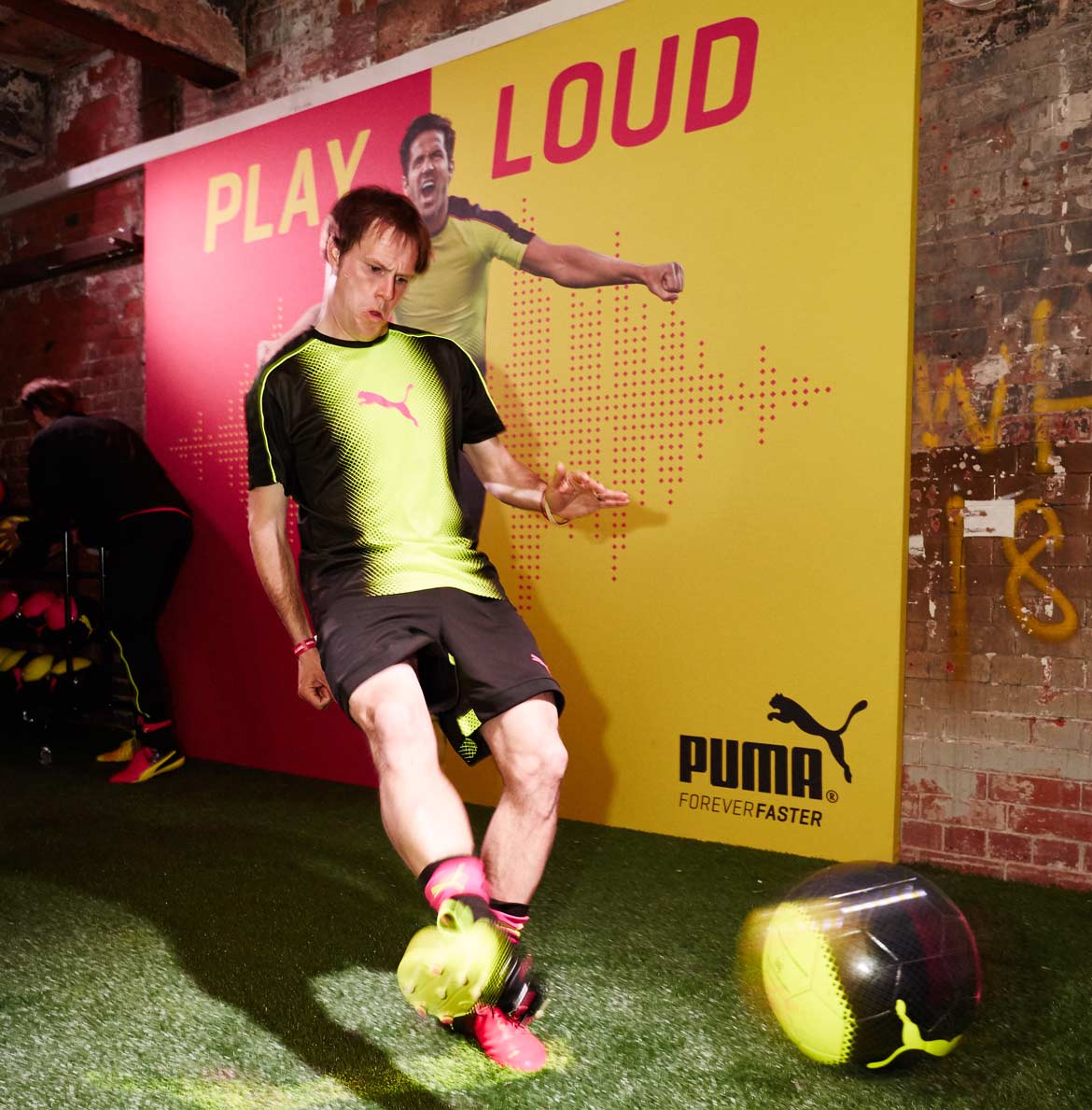 Overall 21/25
The evoPower 1.3 Tricks is bright and loud. It’s very comfortable out of the box and offers a great level of performance. I’d go as far as to say that anyone slipping these boots on for a game would not be disappointed.

Credit: Sergio Agüero, Cesc Fàbregas, Olivier Giroud and Adam Lallana are ready to Play Loud in the weeks ahead in their new dual coloured PUMA Tricks boots, are you?  Shop the new PUMA Tricks evoPOWER 1.3, evoSPEED SL and evoSPEED 1.5. #CHOOSETRICKS

Written By
Scott
More from Scott
A mini goal, ideal for a small sided game, or for training,...
Read More