Puma welcomed a worldwide assembly of media and lucky competition winners to ring in the launch of the new evoPOWER 1 football boots, evoPOWER performance teamwear and Nature of Believing campaign in a star-studded event in (surprisingly) sunny Barcelona late last week.

Hosted by Thierry Henry, the day saw Puma stars Cesc Fabregas, Marco Reus and Mario Balotelli take on a series of challenges against the evoPOWER wall.

Designed by Hawkeye – a name you’ll recognise from the Goal Line Technology pitches last year, as well as Tennis and Rugby – the evoPOWER wall was capable of measuring shot speed and processing power at the point of impact to score contestants based on the strength of their shooting ability.

Puma’s three evoPOWER athletes stepped up to face the wall in front of a stand full of fans; pitting their shot speed against each other from both distance and on the volley, testing their accuracy from the penalty spot and finally teaming up with some competition winners to break down a virtual wall.

The contests seemed to bring out the best in each player’s skill-set, with Balotelli devastatingly powerful from both a standing ball and on the volly, Reus typically German with his accuracy from the Penalty spot and Fabregas at his peak working as part of a team to break down the projected wall.

Particular pressure was piled on Fabregas as Thierry Henry seemed to enjoy singling out the Spanish international as a target for playful ribbing (Henry was backing Puma new-boy Balotelli, whilst Reus enjoyed trying to nutmeg the Barcelona midfielder at any given chance. We’ve no doubt Fabregas’ World Cup winners medal still helped him sleep soundly that night. 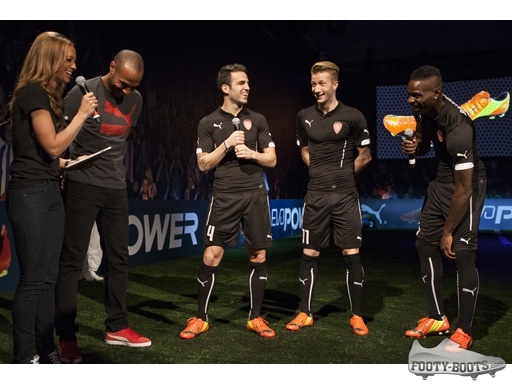 All three stars were genuine in their enjoyment of the event, with Reus happy tp get to meet the competition winners and play against the evoPOWER wall in them.

Built to show off the attributes of the new evoPOWER, the boot was very much at the heart of the event, with Puma’s concept of replicating ‘barefoot kicking’ the subject of much discussion between players and media alike.

Puma product manager Pascal van Essen (Who you can read a full interview with later on this week) explained to us that the evoPOWER has been in development for almost four years, saying the boot gave them a lot to think about in development as it essentially revealed ‘everything we’ve done before, and the entire industry has done before, doesn’t work’ in terms of boosting shot power. 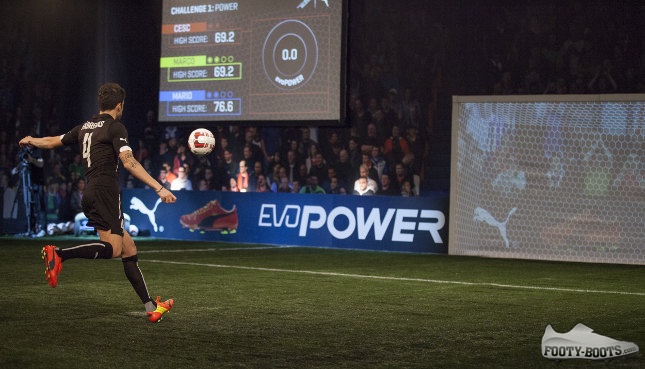 The players, too, admitted it seemed an unusual approach – with the exception of Thierry Henry who confessed it’s always been ‘a dream’ to play barefooted, and the evoPOWER is a natural progression of that for him.

A day with a packed itinerary, those of you who kept up wit us on Twitter and Instagram will know that we snagged a chat with Cesc Fabregas which you can look forward to reading later on this week, as well as some other fun surprises around the evPOWER boot. Keep your eyes peeled on the site over the next couple of days to see what else we managed to get up to!

The PUMA evoPOWER football boots are available from retailers from February 1st. Head to PUMAFootballClub.com to conquer unique challenges and get closer than ever to PUMA players.

Written By
Kyle Elliot
More from Kyle Elliot
We pass on some easy running drills from the Special One that...
Read More