Power-hungry players finally got to get their mitts on the all-new Puma evoPOWER as the cleats made their retail debut' this weekend – but for anyone not sold on Puma’s latest, another option has hit shelves at the same time.

The Puma evoPOWER – Blue Ombre / White / Fluo Peach is the perfect opposite number to the lead evoPOWER launch colourway, offering something a little more reserved in the colourway stakes. 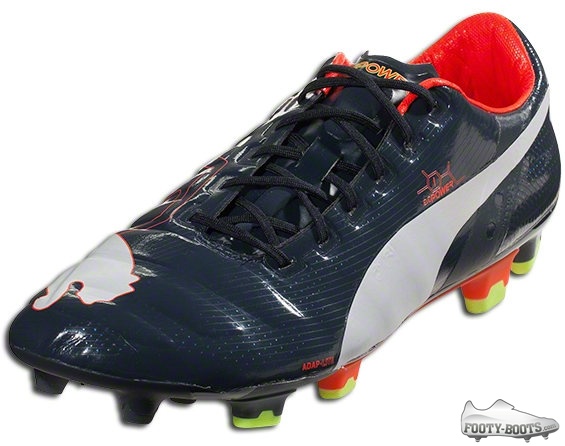 If you don’t know the full story behind the Puma evoPOWER, you can always check out our evoPOWER unboxing and tech rundown.

But, if videos aren’t your thing, here’s the skinny. Puma say that a bare foot is abe to generate a more powerful shot than a booted one. However, players need boots for traction and protection.

So, the Puma evoPOWER follows the anatomical cues of the foot, including the ability to flex upwards and downwards, allowing the foot to dictate the shape of the boot, rather than the other way around.

The is possible down to the raft of technologies on the boot working together; the Adap-Lite upper is a synthetic that will only stretch in one direction, which allows the boot to stretch with the foot as it makes contact with the ball for greater surface area contact.

To help with that, the boot’s chassis utilises the GSF – Gradual Stability Frame – to not only allow that movement without compromising durability, but also limit it in the heel to ensure proper stability.

Puma also added Accufoam to the upper in strategically-placed pods, which flattens out on contact with the ball for a more uniform surface resulting in more consistent strikes.

Build all that on a soleplate designed for stability allowing greater power transference and you’ve got a new take on a proper ‘power’ boot.

Available from today, you can pick up a pair from the Footy-Boots.com store right now. Alternatively, you can use the ad in the top-right and coupon code FBOOTS10Ë› to get you mitts on a pair ” or any other football boots ” for a full 10% off on StartFootball.

Written By
Kyle Elliot
More from Kyle Elliot
Gareth Bale was on target this weekend for Wales in a bespoke...
Read More