Puma have a long history of catering to leather-lovers, offering a leather alternative to almost all of their synthetic football boots since the days of the v1.06. 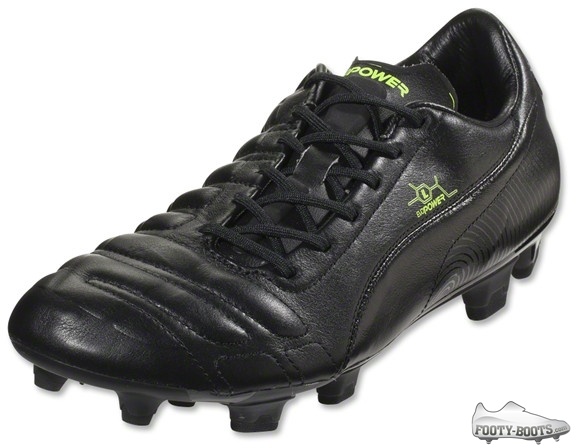 Kicking off its life in a black-out colourway, there’s definitely something appealing about the aesthetics of this boot.

Gone are the ‘Fluo Peach’ and ‘Blue Ombre’ of the launch colourways of the synthetic evoPOWER, and in comes black, black and more black. Barring some luminous green branding on the flank and in the Gradual Stability Frame in the soleplate.

Speaking of, Puma have done their best to transfer across as much of the technology as they can that has contributed in making the evoPOWER 1 one of the standout football boots of 2014 so far.

The aforementioned Gradual Stability Frame – the headline feature of the boot – transitions across seamlessly, creating a chassis that bends and flexes more naturally, creating a boot that allows more surface area contact between foot and ball.

Puma have also worked AccuFoam into the leather upper, allowing for a uniform striking surface that also provides a lovely cushioned surface with which to receive the ball, too.

The collapsable heel section and external EverFit cage also come across for improved comfort and stability.

However, the AdapLITE upper’s unique uni-directional stretch was the key feature that tied many of these technologies together, so with leather lacking that capacity we wonder how different the two boots feel to strike in.

Our guess is the Puma evoPOWER 1L makes for a more traditional-feeling boot with a softer touch, compared to the flexible, bendable dynamism of the headline synthetic release.

What about you guys? Will you be interested in picking up a pair when they go on sale this week?

Written By
Kyle Elliot
More from Kyle Elliot
Five of Brasilian football's premier clubs are united in the yellow of...
Read More