It’s been a little while since we’ve been able to bask in the glory of one of Puma’s always-outrageous ‘Graphic’ designs – but it’s worth the wait as the Big Cat launch the Puma PowerCat 1 Graphic – Dia Del Futbol.

Puma’s past graphic PowerCats have always been something of a treat for fans who like to see something completely unique brought to market; bolder designs like the Elektro and Tokyo have a fond place in the hearts of many collectors, whilst the silver graphic and Munich editions are cool, stylish and more understated. 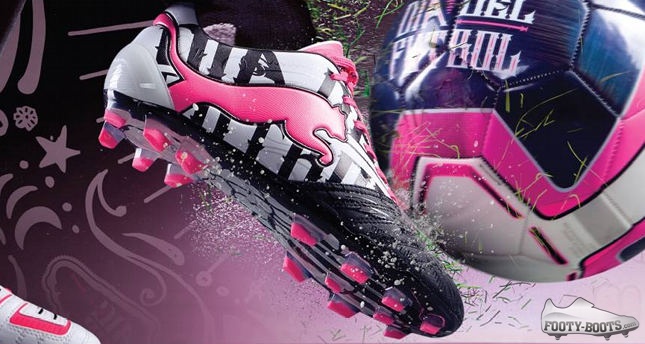 Obviously at the bolder end of the scale, the Puma PowerCat 1 Graphic – Dia Del Futbol' takes it’s design cues from the ‘Day of the Dead’ holiday – or Dia De los Muertos.

Traditionally evoking stylised skulls and intricate prints, Dia De Los Muertos’ imagery of bright colours and macabre theme has become popularised by everything from tattoos, clothing and even an upcoming Pixar film!

Here, Puma have spun off from the idea, creating ‘Dia del Futbol’. Each pair of PowerCat 1s will be contrast coloured – with the left boot boasting a mostly white upper, whilst the right is black.

The tongue features a skull motif, whilst the sole of the boot fittingly has a skeletal foot along the traction plate – similar to the old T90 Laser I.

As with other PowerCat Graphic editions, we expect the forefoot of the Dia Del Futbol' version to be a performance synthetic rather than a natural leather – the trad-off being more sublimated graphics printed into the material to complete the striking look.

Other than the K-Leather change, all of the PowerCat 1’s features remain the same, including the 3DPST DUO technology for improved shot power and improved control.

Available late July globally, what do you think of Puma’s latest Graphic concoction?

Written By
Kyle Elliot
More from Kyle Elliot
Warrior reveal the new Liverpool Away shirt, inspired by a century of...
Read More