Here’s a little behind-the-curtain insight for you; in the first week of the World Cup, one of the most frequent search terms that brought people to the Footy-Boots.com site or one of our videos was ‘odd football boots’ or ‘different coloured football boots’.

Fair to say then, that – in terms of piquing interest – the PUMA Tricks boots were well up there; something worth celebrating, wouldn’t you agree?

Couple that with the best World Cup certainly in our lifetime and PUMA have all sorts of reasons to whip up a commemorative set of boots in the form of the PUMA Celebration Pack limited editions. 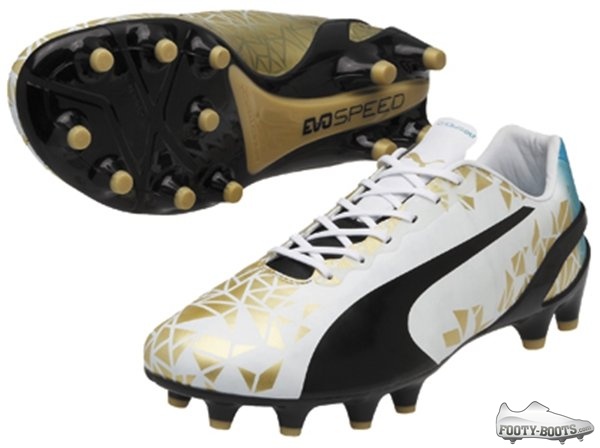 At just 128 pairs per boot, the PUMA Celebration Pack are undoubtedly one for the collectors, looking to mark a stand-out summer for football and football boot fans alike.

Sticking with the theme established on the PUMA Tricks, the limited edition Celebration Pack boots feature the Pink and Blue of the World Cup cleats on the heel, which quickly fade into White and Black, which is in turn covered in Gold geometric shapes.

If the Tricks were for the pitches of the World Cup, then this is their evening wear for the after-party. 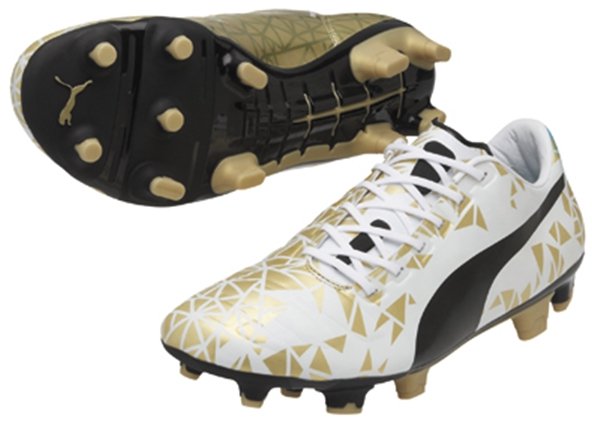 As you’d expect, the two boots featured are the evoPOWER 1 and the evoSPEED.

Now, some retailers are billing the evoSPEED in the PUMA Celebration Pack as the 1.3, however, to our eyes at least, these look like the 1.2 – distinguishable by the renforced lace eyelets and lack of external Everfit cage.

What do you think of the PUMA Celebration Pack?

PUMA Celebration Pack Limited Editions, 8.4 out of 10 based on 10 ratings https://www.footy-boots.com/wp-content/uploads/2014/07/puma-celebration-pack.jpg

Written By
Kyle Elliot
More from Kyle Elliot
Lotto hope to inspire the Italian team at Euro 2012 with these...
Read More