After bringing you the view from one finalists camp at the Al Kass International Cup, we scoped out another prospective superstar in PSG’s Franck Bambock – who you could see pulling on one of two international shirts in the near future. 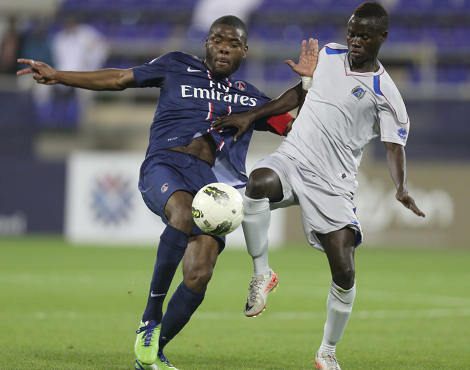 Despite being currently best known for being one of Europe’s big spenders Paris Saint-Germain have had an exceptional youth system for a number of years, and head into tomorrow’s showpiece final against Fluminense with their sights firmly set on retaining their title.

After a dramatic penalty shootout over Boca Juniors in the semi-finals, the young Parisians are within touching distance of writing a new chapter in the clubs prominent history book.

Club captain Franck Bambock has been a dominant force for PSG at the tournament, bagging two goals en route to the final. He declared his side are rearing to go and believes they can overcome the brilliance of the Brazilians.

“We know that Fluminense are a good team but believe we are better. We have many strong, talented players. If we play to our maximum potential they can’t stop us. This will be great match.

“We beat Juventus in the final last year and I am confident we will win it again this year. We are very strong and have played well throughout the tournament so there’s no reason why we can’t win it again. We do not feel under any pressure, we are very relaxed as a team.”

Fluminense were too strong for Inter Milan, sealing a place in the final with an outstanding 3-1 win. Bambock has been impressed by their assets and pinpointed one player in particular he will have to stop.

“Roberto Santos is their best player in my opinion. He is very dangerous, I like him a lot.”

If PSG are to defend the Al Kass Cup they will have to emerge victorious without the services of the suspended Kingsley Coman. Head Coach Laurent Bonadei expressed his sadness that Coman will not be in the final lineup, and Bambock is determined to win the game for his teammate.

“It is disappointing that Kingsley will not play in the final. He is a good friend of mine. He is an important player for us and I believe he is the best player in the whole tournament. However we have other players who can come in and help us win the game.

“It is an honour to be the captain of PSG and it’s something I really enjoy. It’s an amazing feeling to lead the team to the final.”

The France youth international is eligible to represent Cameroon, the birth place of his parents. Bambock revealed he knows who his mother would want him to play for should the opportunity of senior international duty arise – but admits he still has some thinking to do.

“My family come from Cameroon so I have the option of playing for them or France. It’s a difficult decision at the moment and it depends on who calls me first. My mother would choose that I play for Cameroon but either way my family will be proud of me.

“My dad loves football. My parents are very supportive, as are my two brothers and sister. I want to make them proud. It would be amazing to play in a World Cup in the future and that is my ultimate dream. I just don’t know who I will play for yet.

When Bambock, a Puma evoSPEED 1 wearer, returns to Paris he hopes he will be sporting a winner’s medal around his neck, a feat that will no doubt impress one certain new addition to the first team.

“I am hoping to meet David Beckham. I would like to take a picture with him and place it on my wall. He is a big player and it is exciting that he has joined Paris Saint- Germain.”

Written By
Kyle Elliot
More from Kyle Elliot
Ever wondered what proportion of footballers in The Premier League are home...
Read More