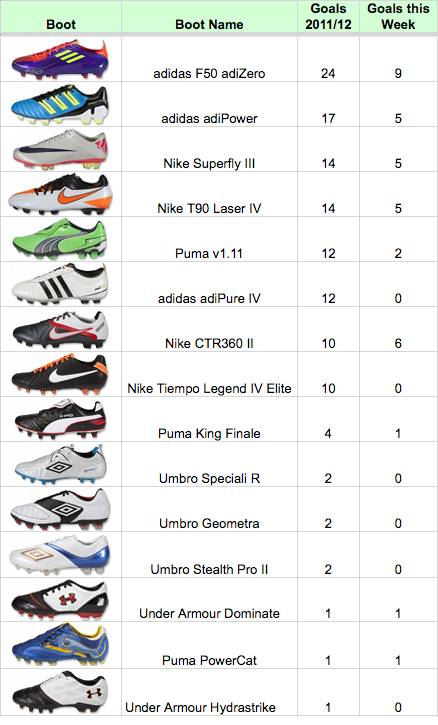 Each game this weekend had at least two goals, and all four of Sunday’s games had the ball hit the back of net a staggering four times, so we thought that it was a good time to bring you an update of the top-scoring cleats and the players that are best representing them!

First of all, the big talking point of the weekend, in terms of football boots at least, was the debut of the new Nike T90 Laser IV. 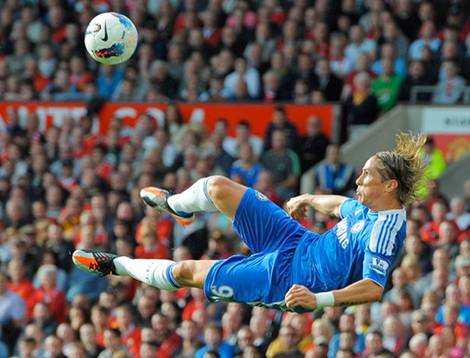 The new Laser found the back of the net 3 times on the feet of Torres, Rooney and Chamakh, but the Laser III proved there’s no reason to write it off just yet, netting two on the feet of Chris Smalling and Danny Murphy.

For the sake of keeping it simple in the long run, the totals for both boots in the long run are both being counted under the ‘T90 Laser’ banner in the scoring charts, putting Nike’s striker-specific new cleats in joint third with their stablemates; the Superfly III. 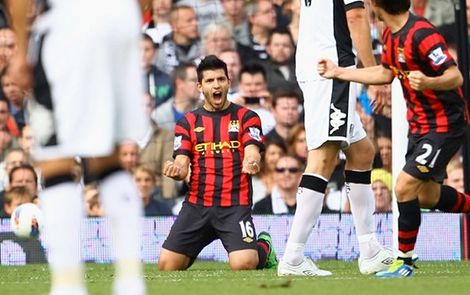 Sergio Aguero is giving Puma plenty to celebrate netting another two goals in the Puma v1.11. That means the Speed football boots from Puma have scored at least twice in every gameweek so far – a feat only match by the leader, the adidas F50 adiZero!

Speaking of the adiZero; adidas’ signature speed football boots rifled in 9 goals this weekend, with Adebayor, Defoe and Leon Best all hitting home in the cleats. 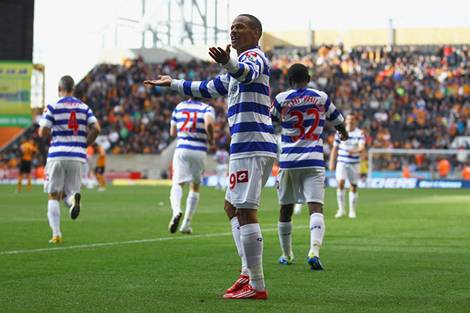 One of the most interesting adiZero talking points from the weekend was QPR’s DJ Campbell wearing the rugby version of the F50, the RS7, in the Hoops’ clash with Wolves.

We had to count this as an adiZero goal, but a very controversial choice of cleat from the former Blackpool forward.

On the same pitch was another point of controversy; this time on Joey Barton’s feet rather than on his Twitter account. 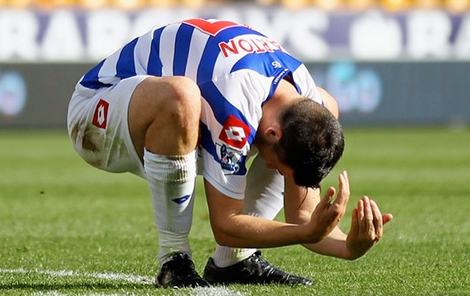 The new QPR captain got the Puma Powercat their first goal of the Premier League season, however, Barton was wearing the a prototype for an unreleased Puma PowerCat, rather than the PowerCat 1.10‘s on the market at the moment.

It was another new entry onto the chart as Fulham’s Bobby Zamora swapped the Hydrastrike Pro‘s he scored in last week for an old pair of his Dominate Pro football boots.

The England international has been in fine form since switching to the Hydrastrike Pro at the end of last season, so we can only guess that the tricky ground after a downpour in London on Saturday afternoon forced the former West Ham and Spurs striker to reconsider his choice of footwear.

Anything else you’d like to see us consider in the football boots scoring charts?

Written By
Michael D
More from Michael D
We tackle 'What are the best types of football boots for 3G...
Read More