With the launch of the new adidas Predator Instinct not long past – and the ‘real life videogame’ launch event even less so – there has been a heady level of Predator nostalgia in the Footy-Boots.com HQ of late, and perhaps one of the only places that could top us for that is here. 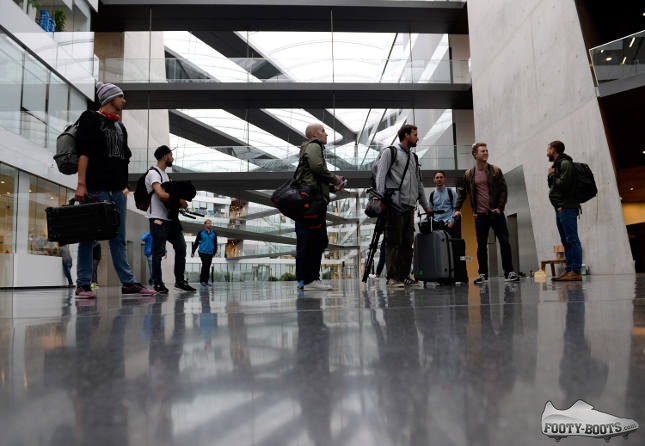 adidas’ Campus out here ‘in the sticks’ (as many of the employees like to say) is home to monolithic glass-and-concrete buildings as well as re-purposed barracks; basketball courts and traditional grass football pitches.

Out in the rolling green Germany countryside, there is an old-meets-new undercurrent to the ever-present feeling that you’re in an amongst the future of just about every sporting discipline on the planet when on adidas turf.

Shuttered windows to labs and workshops tell little of the products being created inside, as staff echo along the criss-crossing walkways and labyrinthian corridors of the ultra-modern ‘Laces’ building. 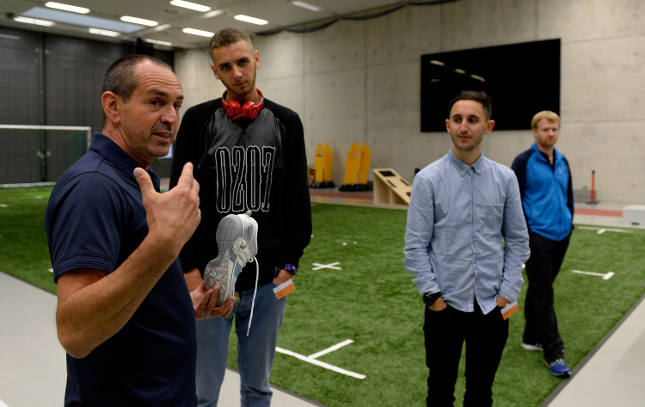 One door that is open to us in this vast headquarters – for today at least – is ‘AIT’. Home of the ‘adidas Innovation Team’ we’re amongst a small group of UK media invited to get a taste of what it takes to create the ‘Best Boot Ever’.

The journey of the Predator doesn’t have a particular first step; this is just one of the feedback loops that each prototype will go through before moving on to the next stage, but it’s here that adidas tweak layouts and gather data on each aspect of the boot. 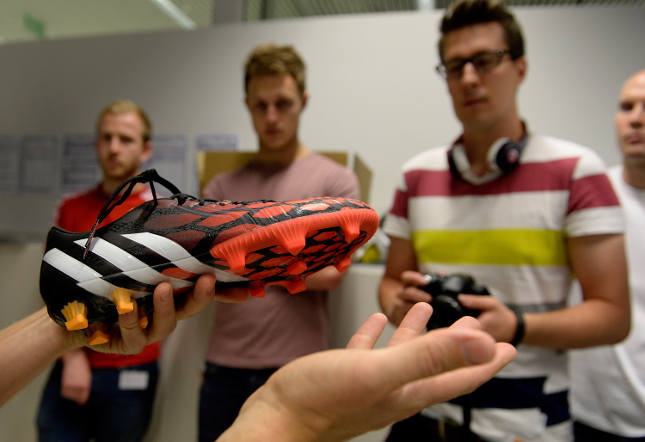 adidas have developed a range of custom-built machines to provide a multitude of metrics on a variety of tests to help gather as much data on every aspect of their footwear, match balls or athletic apparel as efficiently as possible.

An example would be the ‘Robi Leg’ – a wardrobe-high unit containing a mechanical foot, that’s able to consistently replicate the same style of kick endlessly, and with unerring accuracy.

Firing off shots at alarming pace (anecdotes from amongst the AIT staffers suggest even Gareth Bale was unable to match it for sheer MPH), adidas not only test for contact, spin generated and improvements in shot speed, but also for durability of any new components. 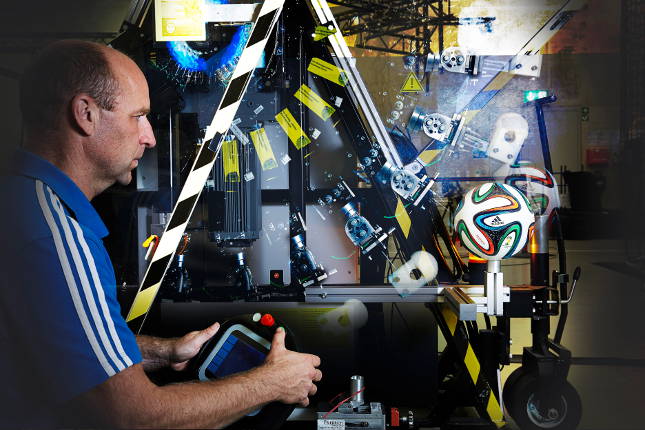 The same goes for the rotational traction test – adidas are able to set this area up with any boot or surface (today it happens to be a Nitrocharge) to test the levels of grip and resistance generated by the studs to turf, but also leave it running over night to see how a new style of stud density holds up after ten hours of continuous grind.

“It’s difficult for anyone to ‘see’ a performance advantage – it’s what an athlete feels. It’s this sensation of what you have on your feet can help you play your game better”, explains Aubrey, but arriving at that ‘feeling’ relies on countless man hours of testing,

“We have these metrics; Robi Leg, the Wet Dry tests – we can’t have it be stand up to testing once, we validate again and again; wet, dry, wet, dry – always challenging, always setting higher benchmarks.” 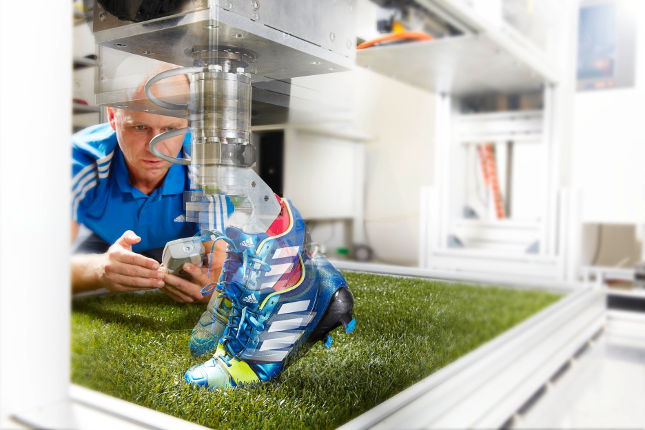 But for every test that goes on in a lab, there’s an amateur, academy or professional team giving the product some hammer out on the pitch.

Feedback from human feet is even more valid than that from robotic legs, according to Aubrey, “Ultimately, we have to create something that players say ‘yes, this is for me’ …we do take risks, we will try something new, but the athlete has to pick it up and want to wear their new boot.”

Aubrey’s colleague, Romain Girard, recalls one player who was always – and continues to be – on hand with feedback, “We’ve met Zidane a couple of times, and he always asks and and the sport marketing guys to make sure he has a pair of the latest models for his personal use and collection.

“He has the aura that the shoe has also, they are the same, naturally. He gives very precise and very valid input” 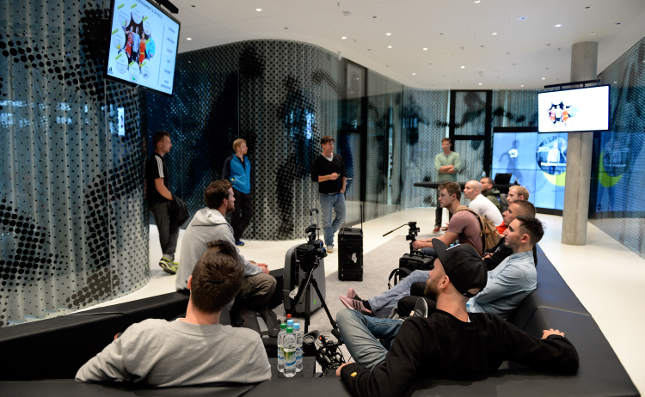 With adidas’ ‘Everything for the Athlete’ motto still ringing in our ears, we’re taken to the normally off-limits ‘Athlete Services’.

Here, adidas can scan everything. No. Really. Everything.

Despite it’s plush appearance, each of those rooms hide full-body scanners, foot mould creators, gait-measuring treadmills – you name it.

The athlete services nonchalantly describe that when an athlete visits (which is fairly often) they can have them completely scanned and analysed, send a player off to do a photoshoot and have a completely custom pair of football boots waiting for them by the time their done – a turnaround time of around 5-6 hours.

We mention that we were available for the rest of the afternoon. 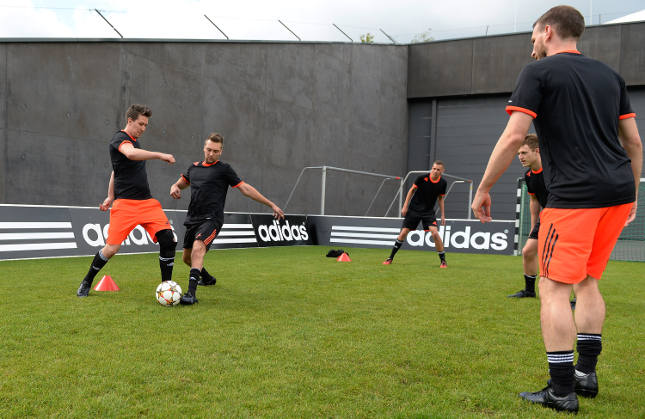 From here we were invited out to the testing pitch at the back of the AIT lab to put the adidas Predator Instinct through it’s paces like the pro’s would – in the triple-black colourway.

At the end of our session, we weren’t invited to give any feedback on the boot a lá Zizou, but our usual cry of ‘blame it on the boots’ after every errant pass certainly felt a little silly, knowing full well how much data the adidas staff had to the contrary.