Now here’s a blast from the past! The legendary adidas Predator back in a bold electricity colourway! 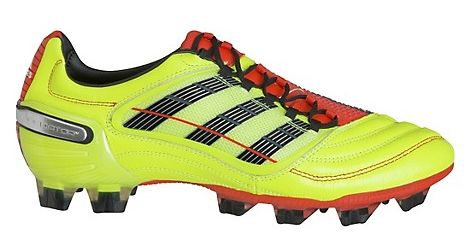 Of course, this is the current Predator_X, but all you old-school football boots fans will remember this particular shade of neon yellow from the adidas Predator Accelerator Liga, which was brought a limited edition version of the Accelerator that was a huge hit with fans of the boot (we’ve even included an image of them in the Gallery if you’ve not seen them!)

Adidas are obviously paying homage to these classic football boots with this Electricity/Black/Poppy colourway, which is definitely going to turn heads on the pitch!

We reckon these are going to be a big hit, especially going into the murky winter months. So next time you’re watching a match in the fog or the rain, keep your eyes out for these luminous adidas Predator_X‘s as they’re probably the only boots that you’ll be able to see!

These new adidas football boots also mark the a price jump that many Predator fans certainly weren’t expecting, seeing the boots jump from an RRP of £134.99 to £149.99.

adidas are also leaving a full month for you to get your pre-orders in, as the boots are revealed today, but won’t ship until the 1st of December – which if you’re buying them for yourself is a heck of first door to open on your advent calendar!

Written By
Kyle Elliot
More from Kyle Elliot
If you're not going to gamble on the Gambler, Warrior have updated...
Read More