In 1984, Cambridge United were awful. They set a league record of 33 matches without a win.

During this appalling run, they were losing at home, again, when one of the opposing players got injured. After a few minutes, it became clear that the injury was serious and a hush descended on the Abbey Stadium as the players looked on, shuffling their feet and just happy it wasn’t them lying on the ground.

After a couple of minutes, some wag (that’s joker not WAG) shouts out “Come on United, you’re terrible so don’t just stand there – practice!”

Players from England, Scotland, Wales, Northern Ireland and the Republic will get a lot of time to do that this summer, in-between taking their partners to ridiculously expensive hotels in Dubai and shopping in LA.

But if you thought that their collective failure to qualify for Euro 2008 would result in a quiet tournament for the football boot manufacturers then you’d be quite wrong. It’s already hotting up and congratulations to Adidas for being the first company to contact Footy Boots with tournament information.

Adidas are releasing new colourways, especially for their players in Austria and Switzerland, of the PredatorPower Swerve, adiPure and F50.8 TUNiT. You’ll be able to see the adiPURE and TUNiT on Footy Boots tomorrow, but for now, feast your eyes on the Predator PowerSwerve. All the techy jargon follows too. 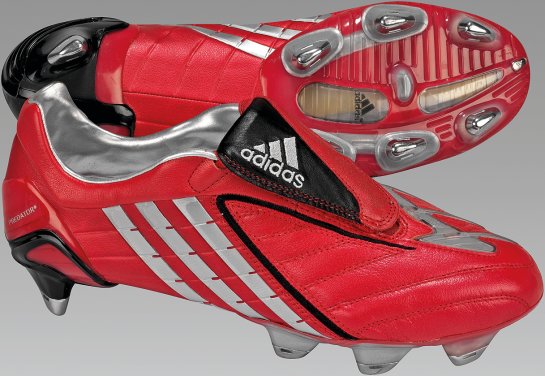 The new football boot features Predator SMART foam on the strike zone to give extra power, swerve and control – in rigorous testing the boot was found to give 3% more force and 8% more swerve than its predecessor. The foam also adapts and changes to suit the way you kick the ball so you get maximum velocity, or shock adsorption, depending on your needs.

The new dynamic PowerPulse insole also now features 40g of ‘Tungsten’ powder – which shifts and spreads weight in the sole to where you need it, behind the exact place of impact with the ball to get total weight transfer.

Each football boot comes with a ‘power’ and a lightweight insole so a simple swap allows the player to customise his/her game.

Written By
Felipe
More from Felipe
The Tiempo Air Legend II gets a facelift. Check it out in...
Read More