Despite the fact that adidas seem to have an SL release for just about all their football boots, for some reason it’s always a surprise when they release a new one! See how the adidas Predator LZ SL – Black / Electricity / Infrared drops it’s weight, here… 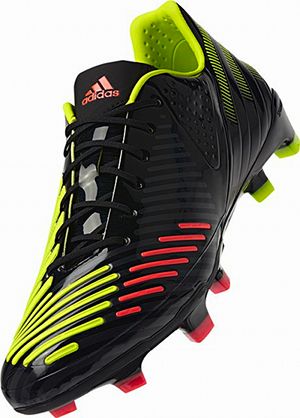 Weighing in at a hair over 200g (205g / 7.2oz) the adidas Predator LZ SL is quite the marvel of boot engineering, having dropped around 30g from the ‘standard’ Lethal Zones.

How? Well, whilst the Lethal Zones that was unveiled in May uses a new HybridTouch synthetic leather, the Predator LZ SL is very much a synthetic boot, using a SprintSkin upper similar to the adiZero.

As such, some of the Lethal Zones have undergone some slight reconfiguring to make them as stable as possible on the new surface. The good news is that Pass, First Touch and Drive are largely unchanged, whilst Dribble and Sweetspot are a little more low-profile on this model – helping to reduce weight.

The new Predators still feature a die-cut EVA sockliner, and the outsole is still the adidas Traxion 2.0 stud system we’ve seen transferred across the adidas range.

Whilst it would have undoubtedly helped to decrease weight even further, adidas have also opted to keep space for the miCoach Speed Cell in the chassis, meaning if you already have a miCoach unit, you can keep tracking your top speed, number of sprints, distance travelled and more.

Let us know what you think using the boot-o-meter or drop us a comment!

Written By
Kyle Elliot
More from Kyle Elliot
It's the Manchester United pair as you've never seen them before!
Read More