Nike will be hoping that the Portugal Euro 2012 Away Shirt embodies the perfect inspiration for Cristiano Ronaldo & Co. as they aim for European conquest in Poland and Ukraine this summer! 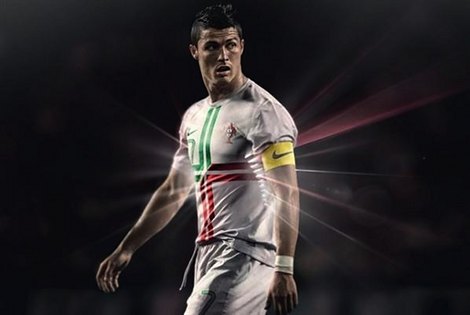 According to designers Nike, Portugal’s Euro 2012 Away Shirt draws inspiration from the country’s adventurous seafaring history and famous explorers – perfect examples for the players to follow as they head into the biggest tournament in European football.

The latest Portugal Away Shirt is white with a large cross on the front – a revered national symbol that was emblazoned on the sails of Portuguese ships. 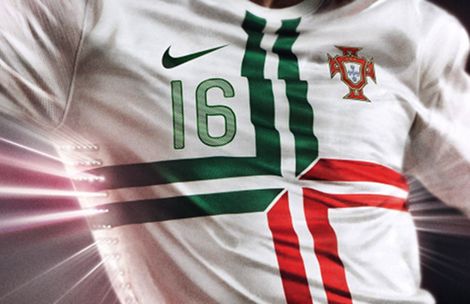 The half-red, half-green cross is divided diagonally at the center to represent the Armillary Sphere, a Portuguese national symbol for 500 years and also found on the nation’s flag. Another Armillary Sphere symbol can be found inside the jersey’s neck.

As with the Holland and France Away kits that launched last week, the Portugal Away kit is amongst the greenest ever produced by Nike, as the shirt and shorts are spun from a material created by recycling plastic bottles from landfill sites. 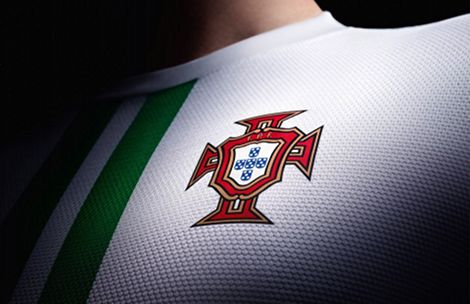 In addition to each kit using up to 13 plastic bottles, the Dri-Fit fabric is 23  percent lighter than the version used at the last European Championships and also use Laser-cut ventilation for localised cooling where athletes need it most.

In addition to the shirt, the away shorts are white. The away socks, now with improved cushioning for greater comfort, movement and protection, are also white with a small green cross on the back of each calf. 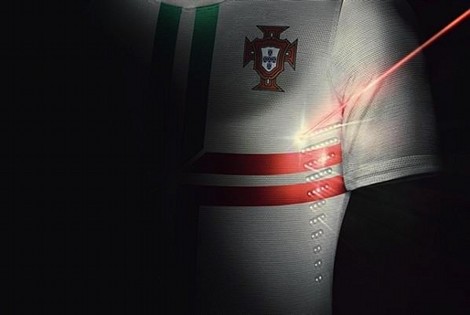 The Portuguese line-up has hardly ever looked stronger, and we think their latest kit is a class act too.

What do you think of the Portugal Euro 2012 Away Shirt? Can Ronaldo & Co. go all the way this summer?

Thanks to Mayur K for sending in some of these pictures to our Facebook wall!

Written By
Ramsay
More from Ramsay
Umbro give the Speciali R a fresh new look with this awesome...
Read More