After the large uptake of players in the new Voltage Cherry Superfly II, it seems like a shade of Pink is the colour to be seen in, football boots-wise! 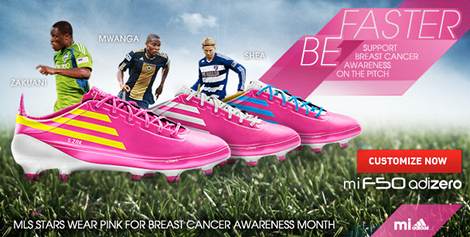 adidas have offered players the chance to make a pair of pink adiZeros on their Miadidas service since the launch of the White/Black/Radiant Pink colourway, but expect to see a few more stars ‘sinking the pink’ over the next couple of weeks!

The pink adizero will be the focus of adidas’ campaign for Breast Cancer awareness, with select stars in the US having already signed up to wear a pair. adidas will also be encouraging their fans to add a splash of pink to their Miadidas football boots – be it pink laces, a pink tongue, or a signature pink three stripes – to show their support for Breast Cancer survivors and patients.

3 MLS stars have already pledged to be part of the campaign, Seattle Sounders’ Steve Zakuani, Philadelphia Union’s Danny Mwanga and FC Dallas’ Brek Shea will take to the field in these bold football boots in honour of someone in their life who was touched by the disease.

There’s no scheme in place that will see adidas make a donation for every pair of Pink boots sold or anything like that, so we can only assume that adidas will be supporting the charity with a one-off donation as well as using this campaign to promote awareness.

Would you take to the pitch in some Pink football boots? Or better yet, which other stars from around the world would you love to see in some pink adiZero‘s?

Written By
Kyle Elliot
More from Kyle Elliot
A fitting farewell for a boot that changed the game; Nike celebrate...
Read More