Puma have confirmed the capture of Tottenham Hotspur & South Africa winger Steven Pienaar today at an unveiling in Johannesburg. 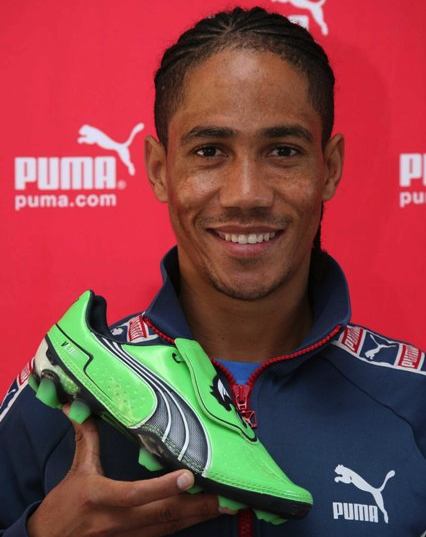 The speedy Bafana Bafana captain is one of the few players we can think of to make the switch away from adidas’ unfathomably popular adiZero range, as he confirms that he will wear the new Puma v1.11 football boots.

Speaking in a PUMA press release, the former Everton Ace said, “I am very happy to have signed this deal with PUMA. Having been involved in the South Africa National team kit launch last month I was seriously impressed with PUMA's commitment to Africa, they have such a strong heritage in African football and their support for this continent is unquestionable.'  Knowing all this, and having tested the Puma v1.11 which is a fantastic boot, it was an easy decision to sign with PUMA and I am pleased to have done so.”

Pienaar spoke to us here at Footy-Boots.com a few months ago endorsing the adiZero Prime, and was keen on the option of being able to play in a choice of Leather or Synthetic, depending on the weather , as well as his love of brightly coloured football boots – so it’s fair to say he should be happy with Puma’s notoriously bold' Puma v1.11 series!

Puma will likely be thrilled at the signing of the Spurs Ace, given their recent deal that has seen them take over the role of technical supplier from fierce rivals, adidas.

The contract is currently set at 4 years – which will see Pienaar wear Puma’s speed football boots through next FIFA World Cup and African Cup of Nations tournaments in 2012, 2013 and 2015 – with an option to renew at the expiry of the term.

Puma’s profile and stock in African football has risen drastically in the last 18 months – do you think Puma’s plan to invest in the unproven, but undoubtedly potential-filled African market will come good?

Let us know what you think of this signing in the comments!