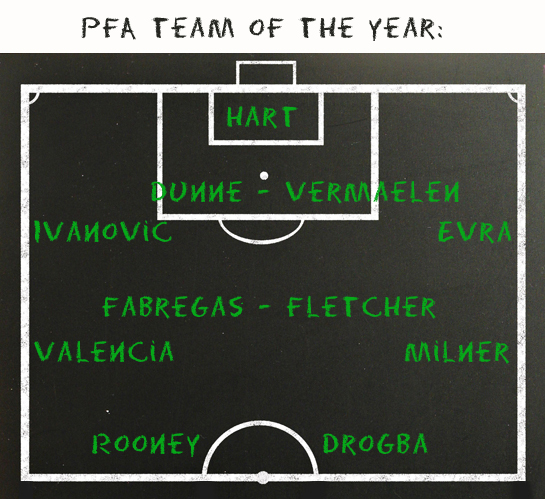 Surprising many is Umbro endorsee Joe Hart. The Birmingham stopper (On-Loan from Manchester City) has been on fine form this season for his club, leading many to rally for his involvement in this year’s England World Cup squad, despite his relative inexperience.

A nice mix of new signings and old reliability makes up the defence.

Predator_X football boot wearer Tomas Vermaelen is the only Premier League newbie who makes the XI – the Belgian has quickly become a force to reckoned with since joining Arsenal in the summer, and has a knack of scoring goals.

Richard Dunne makes the cut at centre-back too, as the successful summer signing has settled in immediately to life at Villa Park. The occasional Puma PowerCat 1.10 wearer has not been without slip-ups this season, but some vital goals and faultless performances earn him a spot in the XI

Ivanovic has hit his stride under Carlo Ancelotti. As well as being strong in the air and a great crosser it’s Ivanovic’s versatility that has endeared him at Stanford Bridge as he’s played in both midfield and defence.

On the opposite side to Ivanovic is fellow Nike T90 Laser III wearer Patrice Evra. Evra’s intelligence and speed have made life easier for Sir Alex Ferguson – who has struggled to settle on a Left Winger this term (rotating Nani, Park, Valencia and even Rooney on occasion) – knowing that whoever he picks has the Frenchman behind them must help Old Trafford sleep at night.

A surprisingly youthful group of veterans in midfield.

Cesc Fabregas occupies the middle of the park for the PFA’s Team of the Year – Arsenal’s lionhearted young captain has battled through injury to provide some great displays worthy of his position as frontman for the Nike CTR360 football boots.

A surprise inclusion is Darren Fletcher, who gets the nod ahead of the likes of Steven Gerrard and Frank Lampard. The Scottish Tiempo Legend wearer prefers a more defensive role in the midfield, and solid performances both in the Premier League and Champions League have earned him a place in this XI.

Luis Antonio Valencia had an uneven start to his career at Manchester United, however, since bagging a few goals and providing some of the most dazzling through-balls, chips and crosses for his team mates Valencia seems to be staking a real claim for his place at the ‘Theatre of Dreams’.

On the opposite wing is recently crowned PFA Young Player of the Year, James Milner. Ironically placed on the wing in the Team of the Year, the Aston Villa dynamo has himself admitted that his performances have only improved since moving to central midfield.

Didier Drogba, the often controversial Nike Mercurial Superfly wearing forward has been outstanding this year. Since playing with, rather than competing against, Nicolas Anelka, Drogba looks set to enjoy his best season ever in a Chelsea shirt

To the surprise of absolutely noone, Wayne Rooney also makes his way into the team of the year – Rooney has improved his heading and close range finishing to make him one of the most complete strikers in the league, if not the world.

If League football’s more your thing, you can find out who was in the PFA’s Football League Teams of the year here!