Pepsi MAX have always had a great track record of producing some absolutely stellar footy-themed ads, and today they’re announcing the latest in that proud lineage. 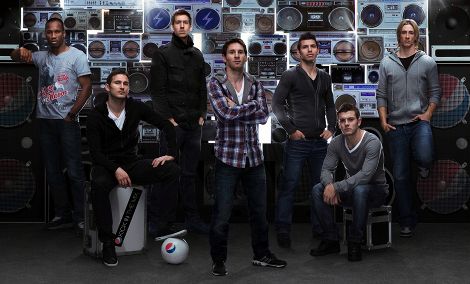 Ahead of the football-fever that will grip the World during the Euro 2012 Championships, Pepsi MAX have lifted the curtain on the brand new, music-fuelled “Kick In The Mix” campaign, which sees the worlds of music and football collide as the Pepsi MAX global superstars take their moves off the pitch like never before.

And boy, have Pepsi MAX assembled a dream-team of players to help out:

The line-up also features internationally renowned DJ, producer and hit-maker, Calvin Harris, who provides the soundtrack and musical direction for the campaign.

Mixing-up the fast-paced world of football and music will see the Pepsi MAX team taken out of their comfort zone and play on a very different type of pitch to what they’re used to.

Lionel Messi, who is now in his fifth year as a Pepsi MAX athlete said, “Pepsi has always been at the centre of pop-culture. Fusing the game of football with music at a time when dance music is so popular is really exciting. Music is a big part of the game and fan experience, so it feels very natural to bring them together.”

We can’t wait to see what the Pepsi MAX team come up with for their latest TV spot, but to get you in the mood for the big reveal, here’s two of our all-time favourites!

Written By
footyboots
More from footyboots
https://www.youtube.com/watch?v=KCVMQHMkK5A European champions are made in the off-season. There aren’t a whole...
Read More