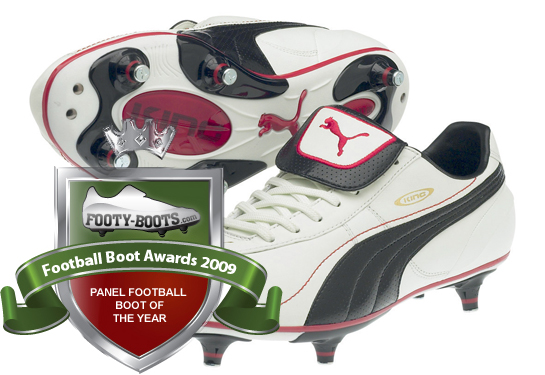 The Puma King celebrates its 40th birthday this year.

First introduced in 1968 as the “King Eus'©bio” to honour Portugal’s legendary Mozambican-born soccer star Eus'©bio da Silva Ferreira who was the top scorer at the 1966 World Cup.

Over the years, the King became a legend and was worn by legends. The world’s greatest football stars wore the King including Eus'©bio, Brazil’s Pele, Argentina’s Maradona and Dutch maestro Johan Cruyff.

We’re thrilled that the King XL has been awarded Panel Football Boot of The Year by Footy-Boots.com.

The PUMA King is one of the most recognised football boots in the game with a long standing heritage and it’s great to know that the boot is still a favourite today as it was when Pele played.

The Footy Boots panel was made up of former professionals, industry writers, and retail boot experts. Amongst the team were:

Andy Kay: Editor of Footy Boots and formerly with the BBC. Andy is a regular director of athletic meetings and expert analyst at the Olympic games.

Chris Toy: Creator of the popular football comic strip Studs Up and a rather obsessive collector of football boots. He is also the original founder CaughtOffside.com.

Written By
Felipe
More from Felipe
The 2011 Champions League final will be staged at Wembley, 19 years...
Read More