Football fans glancing back over the last 10 years will be only too familiar with the sight of bright football boots gracing pitches.

Football boot appearance has changed considerably over the last 10 years too. Back in 2003, Arsenal became FA Cup winners, beating Southampton in the final. Of the 22 players starting the game, just six players wore coloured boots (all Arsenal players). Compare that to the 2013 FA Cup final, 20 players were in non-black football boots when Wigan beat Man City.

Love them or hate them, boot brands are not going to be easing up on novelty colourways any time soon either. Nike, adidas, Puma et al are continuing in their quest to find a design that not only stands out for the TV camera, but also appeals to youngsters for them to trade good behaviour for the latest boot design.

So how did the trend for dazzling footwear come about? 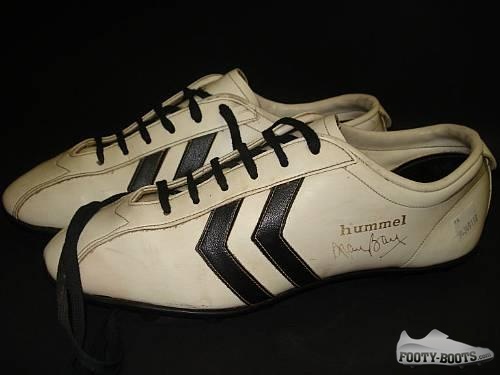 August 8th, 1970. Alan Ball, a member of the 1966 World Cup winning England team, was
donning a pair of white football boots in the Charity Shield for Everton as they beat Chelsea 2-1.

A UK franchise for Hummel had recently been set up in the UK and a forward thinking sports industry businessman named Brian Hewitt had been brought on-board to help drive the brand forward in the football industry.

Brian, having previously worked in football with Slazenger,  a big name in the 60′s/70′s, was tasked with taking Hummel football boots to the UK market.

“I’d made around 5,000 sales of Hummel boots in the UK, but we just weren’t making it [big]. So I spoke to my guys and said nobody’s done it yet, let’s paint the boots white”.

‘So paint their boots white’ was exactly what Hummel did. They then approached Alan Ball, a huge star at the time (World Cup Winner with England), requesting that he put his name on the white boots. Alan felt he had nothing to lose so he was on-board.

Having a white boot didn’t make a massive dent in the football boot market, so Brian arranged for Alan Ball to wear them in the forthcoming Charity Shield match. The problem was, Hummel didn’t have any boots that were right for Alan to use.

Brian; “We took the adidas boots that Alan was wearing for matches and had them sprayed goodness knows how many times, then added the Hummel chevrons on. They were done just in time. In fact on the Saturday of the game we had to have them put on a train in West Yorkshire and they got to Alan just minutes before he needed them for the game.”

It was the first time a pair of football boots were used that were not black or brown. TV commentator for the match was Kenneth Wolstenholme, renowned for commentating the World Cup final in 1966 and for his famous line;

“Some people are on the pitch… they think it’s all over… it is now!”

Wolstenholme mentioned Ball’s white boots several times in commentary and the TV camera featured close up shots of Ball and his shiny white boots on more than one occasion.

The Monday after the game and the Hummel sales line was ringing off the hook. 12,000 pairs of white boots were sold, more than doubling Hummel’s entire sales quota’s in one morning.

Hummel soon improved the quality of their boots and supplied genuine Hummel white football boots to Alan Ball, which he took to the field in.

Due to the success of the white football boot, other brands gradually began introducing coloured football boots; the 70′s and 80′s saw flashes of fashionable neon colour brought into the details of boots, across the soleplate and in the branding.

By the 90′s, brands like Lotto and Diadora made their mark with luminous green detailing on black uppers and today, it’s harder to buy a black football boot than it is a coloured one.

Written By
Kyle Elliot
More from Kyle Elliot
Puma take us on set of a photoshoot to see what makes...
Read More