Take the great Everton and Wales goalkeeper Neville “Baggy” Southall as a good example. Now Southall was no ordinary human being – one of the finest goalkeepers ever to grace an English football pitch – and impervious to pain to such a degree that when playing on the old “plastic” Astroturf pitches of the 1980s at grounds like Boundary Park and Kenilworth Road, instead of wearing goalkeeper trousers to protect himself, Big Nev just slapped a bit of Vaseline on his knees.

And as would be expected, Southall was no fan of padded anything. Although he would wear several layers of goalkeeper shirts in matches (explaining why he would typically leave the pitch sweating as though Goodison Park shared the climatic conditions of the Libyan desert), he used to take the padding out of the official Everton jerseys as he felt it restricted his movement. Specifically, he disliked elbow padding: “I don’t need elbow padding, because I dive properly and land on my shoulders”.

Southall also seemed to wear nothing thicker or bigger than cigarette packets for shin pads.

Irregular man that he was, the Southall perspective in some ways brings out a good point. Padding is after all a pretty new phenomenon. For the vast majority of the history of the game, keepers just wore a different colour jersey to the rest of the team, but no padding or protection to speak of. “And they – Yashin, Banks and co. – did fine didn’t they?”

Well, plenty of the modern goalkeeping manufacturers would disagree. Neville Southall, they would say, is like the guy who smokes 40 a day to the age of 95 and dies a peaceful death from old age: it can happen, but it defies the odds. Most keepers, they would say, can gain great benefit from using padding.

Let’s have a look at a couple of great examples of major padded goalkeeping products. 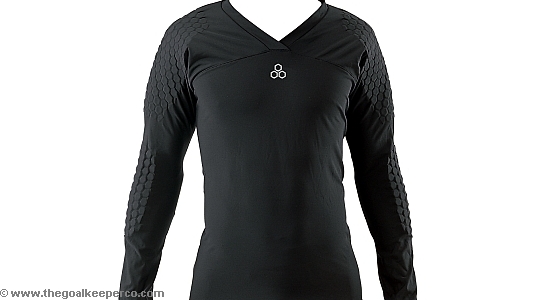 McDavid ‘HexPad’ technology
Invented in the U.S.A. – home of the new-fangled contraption and many a fine development in sports technology – McDavid technology has been applied to a large variety of sports including basketball, American football, and of course soccer. McDavid is worn by a huge number of top sporting stars, and has had as endorsees from the goalkeeping world Jussi Jaaskelainen, Francesco Toldo, Morgan De Sanctis, Sebastiano Frey and Angelo Peruzzi.

We’ll cover McDavid goalkeeping kit in more detail soon, but the important thing to point out now is McDavid’s method of applying padding to goalkeeping clothing while aiming to maintain flexibility, by creating the padding in small hexagonal shaped units – rather than in large segments of padding. All this is fused into an under layer of goalkeeping clothing, designed to be worn underneath goalkeeping match shirts or training kit. 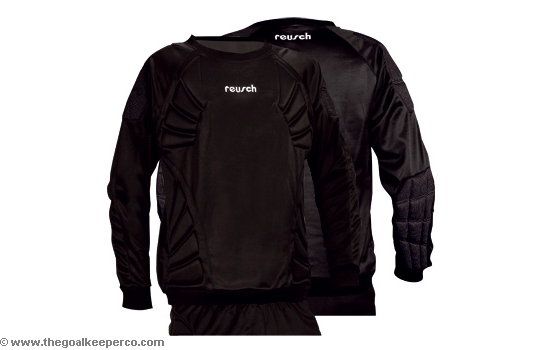 Reusch Guardian Pro Longsleeve Goalkeeper Shirt
Reusch can hardly make a bad goalkeeping product. One of the longest established goalkeeping specialists, Reusch really don’t mess around! The Guardian Pro goalkeeper shirt is a great example of padding technology taken to the limit. Including their ‘Duraguard Technology’, ‘Proguard technology’, ‘Pro Tube technology’ and a load of other stuff to fulfil the goalkeeper’s wildest padding dreams.

We’ll leave it to Reusch to explain what those technology names actually mean:

Duraguard Technology
“With the Duraguard technology Reusch relies on a super-rugged material which has also found its way into motorcycle clothing: Kevlar. What can endure asphalt on the road should also be first choice for the penalty area.”

“With the Proguard, Reusch has developed a new elbow and knee pad which offers even better damping qualities than conventional foam. The dual-layer construction featuring a dimensionally stable shell with a soft inside pad is anatomically pre-shaped, lightweight and extremely rugged.”

“One flying dive and the arm padding has moved from its correct position. With Reusch Protube, a cuff in the shirt keeps the pad at the elbow without limiting the goalkeeper’s movement”.

Padding – good or bad then? Obviously the goalkeeper padding manufacturers have some incentive to tell keepers that they can’t live without padding. We also have some sympathy with the likes of Big Nev, especially from the point of view that padding can restrict movement and prevent the development of good technique.

But at the same time, there really are clear benefits of padding. Hard ground, Astroturf, tough challenges, bad landings from dives – all these things frequently leave the goalkeeper limping from the pitch with cuts and bruises and even lost confidence.

For the goalkeeper who plays on a regular basis, it can be costly to suffer this type of minor injury, restricting training and performance in future games. Technology and equipment that helps out in this way we think must be a good thing. Pad me up!

Written By
Felipe
More from Felipe
Footy Boots continues its examination of the Premier League's done deals with...
Read More