Whilst norwich haven’t had the best of starts to the season, there’s no disputing that Nathan Redmond has been one of the brighter lights at Carrow Road.

Still only 19 and with a tremendous level of pace and confidence, we caught up with the England U-21 international on set at the adidas Samba Pack photoshoot and found ourselves talking to a player who looks forward to new editions of the F50 almost as much as we do!

– What are your first thoughts on the new adidas F50 adiZero?

I think they're really good. Sometimes I'll wait for a boot to come out, and not know how they can make it any better.

This one just feels comfortable after wearing it today. I've been doing some shooting and stuff, but they just feel like slippers as a lot of players say.

They feel comfortable and I'm looking forward to wearing them

– The F50 is adidas„lightest boot – how important is a light boot to your game?

It does make a little bit of a difference when you're striking, but I'm a flair player and having a boot that's lighter does help you feel that bit faster and like you can move your feet quicker.

– How are you finding these over the last model?

I think the last ones were easier than ever just to put on and train in with no break-in and again they've managed to make it so you can put the new ones on and just go and play.

– Most importantly – what do you think of the colour?

I think it's quite good actually! It's not too bright – I'm wearing the Electricity Yellow ones at the moment and they're good for me as they match the Norwich kit a little bit, but they are a little bit bright!

But yeah, I like both the colours that are coming out – I've not decided on whether I'll be in the orange or blue, but it's always nice to have the choice! 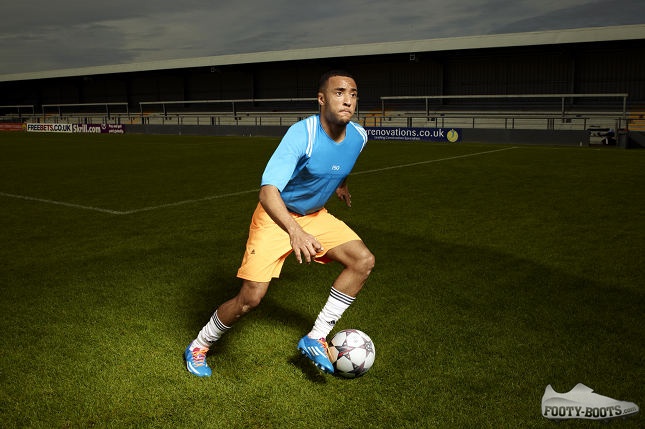 – How has the transition from the Championship to the Premier League been for you?

I think it's been OK. I've enjoyed the step up and the challenge, and I'm just learning every game and every training session.

I'm also getting as lot of experience as a new player on a new team. Coming up from the Championship it has been fairly difficult, but I think I've managed it quite well.

Just the pace of the game and the quality of the players; everyone's on the same wavelength – that means you can get punished from one bad decision.

You just have to be mentality ready and concentration has to be 100% every single game – I think that's the main thing, along with the pace.

– Who is the toughest opponent you've faced so far this season?

– You mention Kyle Walker – do you see yourself playing in front of him in the England line-up any time soon?

Should the chance to play internationally come up, I'll obviously be 100% focused on that, but for the time being I'm just concentrating on doing well for Norwich.